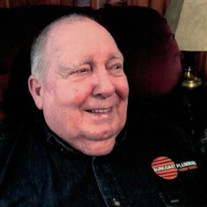 Alfred Edward “Ed” Lightsey, of Laurel, Mississippi age 87, passed peacefully at his home on Friday, May 14, 2021. Visitation will be held at Memory Chapel Funeral Home in Laurel, MS, Tuesday May 18, 2021 from 5 PM- 8 PM. Services will be held there as well, on Wednesday, May 19, 2021 at 2:00 PM, followed by a Masonic Graveside Service at Hickory Grove Cemetery. The Rev. Bill Dowdy will officiate. Ed was born on Friday, December 18, 1933, in Heidelberg, MS, a son of the late Leon Lightsey and the late Jane Simons. He is preceded in death by his late wife, Barbara Elaine Lightsey; his son, Alfred Edward Lightsey, Jr.; two brothers, Gerald Lightsey and Joe Simons. Ed was a member of Magnolia Baptist Church located in Laurel, MS. He attended High School at Heidelberg High in Heidelberg, MS. He served in the United States Air Force for four years as well, and later attended Jones County Junior College, in Ellisville, MS. He would later graduate from Mississippi State University in 1962, with a BS degree in Electric Engineering. After finishing college, he accepted a job at the National Aeronautics and Space Administration (NASA) at Cape Kennedy in February of 1962. He held the position of Deputy Branch Chief and Program Manager of the Acceptance Checkout Equipment. After three years, he moved to the Johnson Space Center in Houston, TX. His duties included a contract with General Electric to support final assembly and checkout of shuttle vehicles. In other words, if astronauts were involved, he was there. He contributed to every manned mission from the first Earth orbit in 1962 to the shuttle programs up until he retired in October of 1983. He did his job effectively, winning countless awards for his achievements. He initiated the first-of-a-kind analog magnetic tape recertification facility which allowed tapes that record data from space vehicles to be reused. He also designed a meter to provide doctors with a readout of the astronauts’ heart rates. In October 1983, Ed retired from NASA and moved back to Laurel with his wife Margaret G. Lightsey. He always said the he had done more than he ever dreamed he would do, and that every young person should have a dream and work towards that goal. He was a member of the American Legion and the VFW. He was also an active Mason Scottish York Rite, and Hamasa Shriner. He was a Past Head of all Bodies in the Scottish York Rites in Laurel. He was a Past Venerable Master and had his 33rd degree in the Scottish Rites Mason of the Valley of Meridian and the Past Grand Commander of Mississippi, and also a Past Master of W.E. King #6115, of Heidelberg, MS. He enjoyed going to Thursday groups at Eatonville, MS, and he loved travelling to Congressional Schools with the Homer Sullivan, Jordan Downs, and Jeff Gardener. In 1990 he served as Potentate of the Hamasa Shriners, in Meridian, MS and was a Past President of the Laurel Shrine Club. Ed is survived by his wife, soul mate, Margaret G. Lightsey of Laurel; his daughters, Melonie Posey of Victoria, TX; Robert and Tonya Hebert of Oakhurst, TX; and Tamara Overstreet of Laurel, MS; stepsons, Bennie and Sandra Blackledge of Hot Coffee, MS, Michael Blackledge and wife Nodie, of Meridian, MS. Numerous grandchildren and great-grandchildren as well. Ed was a hard worker with lots of compassion for everyone. He taught his children many things, but most importantly, he taught them to know that if they really put their minds to it, they could accomplish anything. His love was unconditional and will be cherished from his character. His kindness and generosity will be remembered by all who had the pleasure of knowing him. He was very close to being the most perfect dad anyone could have. His special smile and caring heart will embrace us forever. He stuck with us through the good and bad times, no matter what. Pallbearers will be Robert Hebert, Jason Hebert, Zachary Foster, and Dylan Foster, Jared Gardener, and Chase Castle. Honorary Pallbearers will be Jim Hughes, Cliff Bradford, Wayne Waltz. Dad you will always be remembered because there’ll never be another one to replace you in our hearts, and we will always have that love for you! We love you and DON’T YOU FORGET IT! Memorials may be made to the Laurel Shrine Club, 4757 Old Hwy 15, Laurel, MS, 39443,Magnolia Baptist Church 1040 Wansley Road, Laurel, MS 39440; or a charity of your choice. Also, we would like to give special thanks to his personal caregivers, Tanya Pruit, Cari Sims, Robin Terrell, Esparanzo Williams, and Mrs. Mazie Cooke for loving and caring for our father. We appreciate you all very much. To sign the online guest book, please visit www.memorychapellaurel.com

The family of Alfred Edward "Ed" Lightsey created this Life Tributes page to make it easy to share your memories.

Send flowers to the Lightsey family.