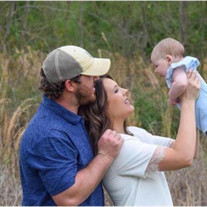 Austin Dwayne Brashier, 27, was born December 22, 1993 in Laurel, MS. He passed away on July 18, 2021. A visitation will be held Tuesday, July 20, 2021, from 11 a.m. to 2 p.m. at Life Church with funeral to immediately follow. A graveside service will follow at the new Sharon Cemetery across from First Baptist Church of Sharon. Memory Chapel Funeral Home is in charge of arrangements. He was preceded in death by his grandfather, James Hardy Brashier. Survivors include his wife, Dora Brashier; son, Kason Brashier; father, Dwayne Brashier; mother, Nancy Brashier; sisters, Lauren and Autym Brashier; father-in-law, Jeff Winstead; mother-in-law, Sandy Winstead; brothers-in-law, Jeff and Michael Winstead; sister-in-law, Darla Eschete (Josh); nephews, Maddox Winstead and Bryse Eschete; niece, Lily Eschete; and a long line of loving family and friends. Pallbearers will be J.J. Windham, Zac Ferguson, Michael Winstead, Hunter Walters, Tyler Jones, and Andrew Jones. Honorary pallbearers will be Colby Reeve, Matt Wooten, and Jackson Tisdale. He was a genuinely good kid growing up. He was active in multiple sports and never got into trouble. He was always a hard worker, didn’t have a lazy bone in his body. He had a great sense of humor and was fun to be around. He was adventurous and always open to trying new and sometimes even risky adventures. If there was a new rollercoaster at the theme park, he could easily be persuaded to ride it. No one on the planet loved to hunt and fish more than he did. He had a big heart and genuinely cared about people. He was the one who never forgot a birthday. You could always count on receiving a message from Austin on your special day. He loved his family and loved spending time with them. He was a wonderful son. He was an awesome big brother, always the protector of his little sisters. He was a loving husband and great provider for his wife, and he was an amazing dad to his seven-month-old son, Kason. He will be greatly missed by all of us! To sign the online guest book, visit www.memorychapellaurel.com.

The family of Austin Dwayne Brashier created this Life Tributes page to make it easy to share your memories.

Send flowers to the Brashier family.