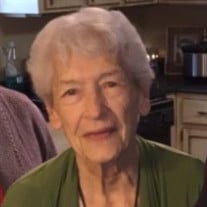 A lifetime resident of Laurel, Beatrice Idell Wiggington Robinson, passed away peacefully at South Central Regional Medical Center on October 21, 2021. She was born to Braddis Knight Wiggington and Buford Wigington on February 19, 1931. She was fondly known as “Bea” to her immediate relatives and long-time friends. She met her high school sweetheart, and later husband, while in school at George S. Gardiner High School. Together they had one child, Stephen Ray Robinson. She was a long-time member of Dixie Golf Course, and enjoyed playing the game of golf with her special ladies’ group. During the spring and summer months she enjoyed and took much pride growing unique plants and flowers, along with these she and Ray always had a planted garden which was shared with friends and relatives. She began her career with the Masonite Corporation in 1957. As the Masonite Corporation grew between through 1950s through 1980s, Beatrice was a valuable asset to their corporation. During her employment, she worked in various departments and possessed tremendous leadership skills and was a well-respected employee of their company. She is remembered by her kind and gentle spirit and her willingness to be a giver to others. Much joy was taken in her only grandchild, Andrea Robinson Walters, and two great grandchildren, Jackson Ray Walters, and Kaylin Elizabeth Walters. She was preceded in death by her husband, Ray; two brothers, Baby Boy Wiggington, and Billy Harold Wiggington, and parents, Braddis and Buford Wiggington. Survivors include her only son, Stephen Ray Robinson (Barbara); one sister, Martha Ann Nelson (Harold); grandchild, Andrea Robinson Walters (Justin); great grandchildren, Jackson Ray Walters and Kaylin Elizabeth Walters; and one very special friend, Lindsey Munn. Memory Chapel Funeral Home is responsible for arrangements. Her service will be held Sunday, October 24, 2021 with visitation at 2:00 p.m. at Memory Chapel and funeral at 3:00 p.m. in the chapel. Burial will be at Union Line Cemetery. Pallbearers will be Carl Frank Hill, Jr. (Tut), Greg Wiggington, Michael Nelson, Jason Hilbun, Scotty Graves, and Dylan Nelson. To view and sign the online guestbook, visit: www.memorychapellaurel.com

The family of Beatrice Idell Wigington Robinson created this Life Tributes page to make it easy to share your memories.

Send flowers to the Robinson family.