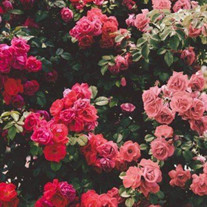 Beverly "Jody" Walker Tillery passed away Thursday, March 17, 2022 surrounded by family in her home in Laurel, Mississippi. The only child of C.H. and Georgia Walker, Jody was born in Altus, Oklahoma on June 28, 1931. Creative, intelligent and beautiful, Jody was an inspiration to her family and friends. Her life was characterized by strength of character, steadfastness, faith, and grace. The graveside service will be held at Crestview Cemetery, Saturday, March 19th at 3:00 p.m. Reverend Mike Allen will officiate. Jody was a graduate of George S. Gardiner High School and the University of Alabama, where she was featured as a Reveille yearbook beauty. In 1950, as a young adult she was chosen as Laurel’s Miss Hospitality. She also performed as a member of the precision water ballet team at Lake Waukaway. Jody and her husband, Bill, raised four Mississippi State University graduate daughters. They were active in the Mississippi Republican Party on the national, state and local level in the 1970’s. Jody was a member of Westminster Presbyterian Church and a life member of the Little Garden Club. Her creativity and intelligence led her to work in interior design, the frame business, as well as the oil business. Her grandchildren called her “Mother Jo” and marveled at how she embraced technology and could not be beaten at Scrabble online! Jody was preceded in death by her husband, Billy Prowell Tillery, and her parents, (C.H) Harvey and Georgia Walker. She is survived by her four daughters: Lisa Purdum and her husband Randy of Laurel; Jan Rhodes and her husband Scott of Midland, Texas; Lynn Hayes of Charlotte, NC; and, Susan Leslie and her husband Tim of Lubbock, Texas. She was blessed with nine grandchildren; Christopher (Lindsay) Purdum of Magee Mississippi; Jeremy (Mackenzie) Purdum of Jackson, Mississippi; Tyler Rhodes of New York City, New York; Laurel (Joel) Lapidus of Evergreen, Colorado; Tillery (Aaron) Ranft of Charlotte, North Carolina; Blair (Delton) Poole of Telluride, Colorado; Travis Hayes (Katie) of New York City, New York; Logan (Courtney) Leslie of Fort Worth, Texas; and Brent (Kyleigh) Leslie of Wolfforth, Texas. Her seven great grandchildren include Hudson Purdum, Walker and Jones Lapidus, Reese and Hayes Ranft, Sawyer Leslie, and Parker Leslie. During her later years, Jody was cared for by attendants in her home, who provided love and support. The family greatly appreciates their devotion. Grandsons and sons-in-law will honor Mother Jo as pallbearers. If desired, memorials may be made to Westminster Presbyterian Church, 1200 Highway 15 North, Laurel, MS 39440, or a charity of choice. To sign the online guest book, visit www.memorychapellaurel.com.

Beverly "Jody" Walker Tillery passed away Thursday, March 17, 2022 surrounded by family in her home in Laurel, Mississippi. The only child of C.H. and Georgia Walker, Jody was born in Altus, Oklahoma on June 28, 1931. Creative, intelligent... View Obituary & Service Information

The family of Beverly "Jody" Walker Tillery created this Life Tributes page to make it easy to share your memories.

Send flowers to the Tillery family.