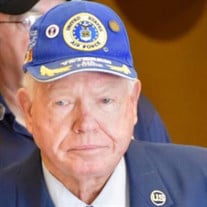 Billie Jene O’Neal, a military veteran and longtime resident of Laurel, Mississippi, passed away on February 9, 2022 surrounded by his family. He was born on Tuesday, July 21, 1936 in Columbia, Louisiana and attended school in Chatom, Alabama before enlisting in the United States Air Force. He started his career in Bremerhaven, Germany where his new bride came and joined him. The US Air Force recognized Billie for his honorable service with numerous medals over his 20-year career. He flew over 100 missions while stationed in Phu Cat Vietnam in addition to being a Radio Morse Code Operator. After his retirement from the Air Force he went back to college and received a HVAC degree and went to work for Thermo Kool where he installed walk-ins throughout the southeast United States. One of his biggest passions was volunteering to help other veterans and doing private tours at the Veterans Memorial Museum. He was also a member of Freedom Baptist Church in Myrick, Mississippi where he served as the Senior Adult Men’s Sunday School Teacher and on several boards. Billie was also a charter member of the M&M Volunteer Fire Department. Billie was preceded in death by his parents Hezekiah “Bud” O’Neal and Jessie O’Neal; his infant daughter Rebecca; his sisters Louise, Peggy and Mae; and his brother Tommy. He is survived by his wife Maggie Isabel “Bell” O’Neal of 64 years; his children Darlene Meadows (Thomas), Richard O’Neal (Angie) and Steven O’Neal (Alex); his grandchildren Shannon Blailock (Ben), Ryan Meadows (Kristen), Hailey Eddy (Josh), Rebecca Scarbrough (Daniel), Carter O’Neal, Haidyn O’Neal and Kinsley O’Neal; and his great grandchildren Caleb and Gracie Blailock, Luke and Olivia Eddy and Sofie, Brennan and Elana Scarbrough. His family has organized a memorial service to honor Billie’s life and military service which will be held at Freedom Baptist Church on Monday, February 14, 2022. Visitation will begin at 1 p.m. and the service will follow at 2 p.m. Interment will follow at Myrick Cemetery. Rev. David Fedele, Rev. Greg Foster, and Rev. Robbie Johnson will officiate. In lieu of flowers please sent donations to: Veterans Memorial Museum, 920 Hillcrest Drive, Laurel, MS 39440. Honorary pallbearers will be the Senior Adult Men’s Sunday School Class. To sign the online guest book, visit www.memorychapellaurel.com.

Billie Jene O&#8217;Neal, a military veteran and longtime resident of Laurel, Mississippi, passed away on February 9, 2022 surrounded by his family. He was born on Tuesday, July 21, 1936 in Columbia, Louisiana and attended school in Chatom,... View Obituary & Service Information

The family of Billie Jene O'Neal created this Life Tributes page to make it easy to share your memories.

Send flowers to the O'Neal family.