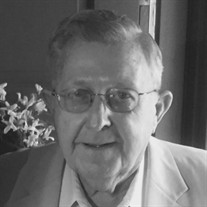 B. G. “Shorty” Newcomb was born in Smith County, Mississippi on Tuesday, September 10, 1935 and died on Friday, August 21, 2020 at the age of 84 at Forrest General Hospital in Hattiesburg, Mississippi. He retired in 2013 from a lifetime in the oilfield industry. Through hard work, grit, and determination, he worked his way through various job positions and retired as a successful consultant. His hobby was his work and he had a reputation of being one of the best. His fellow workers in the oilfield industry were family to him. While serving our nation in the United States Army, Shorty was stationed in Germany. He was also a member of the fraternity of the Scottish Rite of Freemasonry as a 32nd° Mason and a Shriner. Shorty was a faithful member of Trinity Baptist Church of Laurel. Last year during a hospital visit with a friend and co-worker from the past, Shorty expressed that he was not the same man that his friend had known and worked with because the Lord had done a work in His life. We give honor, praise and joyous thanks to the Lord for this testimony! Shorty is preceded in death by his parents, Barney Eugene Newcomb and Mollie Dickerson Newcomb; his four brothers - Eligah, Bob, Bill, and Nevels Newcomb and three sisters - Fannie Westbrook, Minnie Allgood, and Mary Etta Evans; daughter, Ellen Jenkins; son-in-law, Skipper Tagert, Sr.; and his wife of 25 years, Carolyn Newcomb. He is survived by his wife, Bobbie Newcomb of Laurel and his children - Sandy Schwan (Dennis) of Ellisville; Wanda Smith (Randy) of Ellisville; Shelia Tagert of Tylertown; Roxann Flowers (David) of Ellisville; Teresa Newcomb of Ellisville; 9 grandchildren - Michelle (Chad) Robertson, Joshua Myrick (Barbara), Kayla Boudreaux (Danny), Mally Tagert, Matt Newcomb, Anna Walley, Caden Flowers, T. J. Ryals, LeAnn Evans (Eric) and 14 great grandchildren. The family gives praise and thanksgiving to Jesus, our Savior and Lord, for always being faithful and true. It is by His mercy and grace that we have experienced strength and peace during Shorty’s deteriorating health. We wish to express our appreciation to Doctors Terry Lowe, Josh Blair, Diego Alcivar, Wesley Aldred, and Justin Westervelt and their respective coworkers and staff along with the nursing and therapy staff at Forrest General Hospital for their professional medical care and especially their compassion during these last months. Graveside services will be at 1:00 p.m. on Monday, August 24, at Lake Park Hills Cemetery off of Hillcrest Drive in Laurel, Mississippi. Rev. Bill Blair will officiate. Pallbearers will be Don Bridges, Ricky Bryant, Terrell Clark, Johnny Holifield, Adrien Loper, and Mark Windham. Honorary Pallbearers will be Matthew, Landon, and Rylan Newcomb, Paul Palmer, Pete Rawson, Ronnie Roundtree, and Freddie Welch. To view and sign online guestbook, visit www.memorychapellaurel.com

The family of Bonnie Gene Newcomb created this Life Tributes page to make it easy to share your memories.

B. G. “Shorty” Newcomb was born in Smith County, Mississippi...

Send flowers to the Newcomb family.