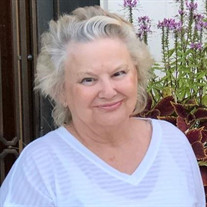 Bonnie “Jeanelle” Troutman, 79, passed away on Tuesday August 27th, 2019 in her home in Sandersville, MS. The visitation service will be held August 29th at Memory Chapel Funeral Home in Laurel, MS from 5:00pm – 8:00 p.m. The funeral service will be held Friday at The Church of Jesus Christ of Latter Day Saints in Laurel, MS on Audubon Drive at 10:00 a.m. Jeanelle was born June 13, 1940 in Laurel MS to Theodore and Virgie Johnston. She was the youngest of thirteen children and grew up in Jasper County. She was known as a local artist who had several showings of her work at the Laurel YWCA. She also won numerous awards at the South MS State Fair, which included several “Best in Show” awards. She was a featured writer for the Laurel Leader Call in the 1980’s. She was a novelist who wrote several novels, short stories, and poems. She married Larry Troutman on August 31st, 1974 in Laurel, Mississippi. They lovingly raised four children, Thomas “Tommy” Warren, Kathie Edwards, Suzanne Carey and Joey Troutman in the old Doctor Copeland home in Sandersville, MS. She was a member of the Church of Jesus Christ of Latter Day Saints where she served in many capacities. In her later years she loved spending time with her children, grandchildren, great-grandchildren, nieces and nephews. Everyone that knew her will always remember her as the epidemy of the classic southern lady. She is preceded in death by her parents and her 11 brothers and sisters. Her memory will be cherished by her sole surviving sister Mary Faye Briere-Johnston. She is survived by her husband Larry Troutman, her four children Thomas “Tommy” Warren (Cindy Warren), Kathie Edwards (Jesse Edwards), Suzanne Carey (Neil Carey), and Joey Troutman (Daisy Troutman). She will be missed dearly by her 11 grandchildren and 6 great-grandchildren as well as several nieces and nephews. To sign the online guest book, visit www.memorychapellaurel.com.

The family of Bonnie "Jeanelle" Troutman created this Life Tributes page to make it easy to share your memories.

Send flowers to the Troutman family.