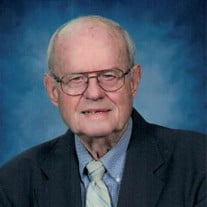 Byron Hillyer Gough, May 18, 1928-October 8, 2019 Our father was born in Laurel, MS, where he attended George S. Gardner High School, earning a reputation as a gifted athlete, lettering in football and basketball. He earned a business degree from Mississippi State University, where he met his wife, the late Sallie White Gough, and earned his mechanical engineering degree from the University of Texas at Austin. In between, he trained as a pilot and served in supply with the US Air Force at the tail end of the Korean War. He spent the bulk of his civilian career in charge of maintenance at Howard Industries, having returned to Laurel from Dallas at the invitation of Billy Howard who was preparing to launch his new venture. At home he was a master Easter Egg dyer, splinter remover, and short order cook. Dad retired in 1999, but continued to work part-time until February 2018. The “young engineers,” as he called them, were ever patient, turning his hand drawings—which they praised—into digital designs. He was “old school,” but he knew everyone in town and enjoyed the personal approach when working with machinists to bring his designs to fruition. Our father loved routine: his morning coffee and newspaper, his evening “imbibement,” Sunday church, and thrice weekly workouts. He dabbled in golf, but was addicted to televised football and basketball with, in his later years, the sound off and the closed captioning on because he couldn’t hear. He loved to say that the Wellness Center employees made him leave because he “had their machines smoking.” But he also loved departures from routine, especially if it involved travel to New Orleans or to Europe where he once attended a French cooking school—probably not his idea—and fell in love with Lake Como. He was curious and passionate about maps and weather—especially if it was gray and chilly and he was near a beach—and he had a soft spot for animals. The only thing he loved more were his friends and his family. And we him. Our father was never the sit-you-down-and-impart-fatherly-wisdom type of dad. Rather, he lived his life as an example of steadfast, low-key decency, honor, dependability, and good-natured selflessness. He was a bit of a harmless flirt, appreciative of women who were smart, resilient, and engaging; but he was drawn to unpretentious intelligence and integrity in all people. Warm, genuine, jovial, and non-judgmental—unless you needed judging—our father had the ability to fill a room with his undeniable presence and make you feel special. He was personally frugal, but privately generous to his church, First United Methodist, and to various friends of the family in need, quietly stroking a check or slipping a wad of bills into an unsuspecting hand. He was a consummate provider and a selfless nurturer and caretaker, devoted to his mother, Cammie Jackson, who raised him as a single mother and lived to be older than him, tenderly rubbing her gnarled feet in the nursing home. Later, he could be found kneeling on the floor helping our ailing mother with her knee-high stockings and sensible shoes. He once said, completely without regret, that he didn’t have a choice. But he did. He just always chose to do the honorable, loving thing. In recent years, due to his hearing loss, he had taken up texting. Increasingly, his frequent texts ended “Love you so much.” And how, Papa. He loved big and was going to live forever. When all signs pointed to the contrary, he—and our mother—had always made the world seem like a joyful and wonderous place. The pair of them made the mundane magical. Here’s to you, Dad. The world was a better place with you in it. But, in your physical absence, we are all better because you loved us fiercely and completely. ~Ginny Gough, Laurel, MS, and Betsy G. DiJulio, Virginia Beach, VA Services will be held on Sunday, October 13, 2019. Visitation will be at Memory Chapel Funeral Home from 1 p.m. until 2:30 p.m. with graveside services to follow at 3 p.m. at Lake Park Hills Cemetery. Rev. Mark Anderson will officiate. To sign the online guest book, visit www.memorychapellaurel.com.

Byron Hillyer Gough, May 18, 1928-October 8, 2019 Our father was born in Laurel, MS, where he attended George S. Gardner High School, earning a reputation as a gifted athlete, lettering in football and basketball. He earned a business degree... View Obituary & Service Information

The family of Byron Hillyer Gough created this Life Tributes page to make it easy to share your memories.

Send flowers to the Gough family.