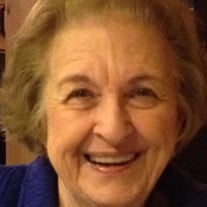 Carolyn C. Harry, 96, of Laurel, Mississippi, born March 24, 1923, passed away at her residence in Laurel on Saturday, September 14, 2019. There will be a visitation from noon until 2 p.m. on Saturday, September 21, 2019, at the First United Methodist Church, 420 N. 5th Ave., Laurel, MS 39440, with a funeral service at 2 p.m. and burial to follow at Lake Park Cemetery, 1220 Old Bay Springs Road, in Laurel. The Rev. Mark Anderson will officiate. Mrs. Harry was born in Pontotoc, attended the Mississippi University for Women and graduated from the University of Mississippi. She worked as a hostess on a train out of New Orleans until John Jason Harry, III (ret. Lt. Cmdr., U.S. Navy) returned from World War II and they married. They lived in Columbia and Ocean Springs, Mississippi, before John became president of the First National Bank of Laurel. Mrs. Harry loved playing bridge with friends and was a long-time member of and active with the First United Methodist Church in Laurel and the Laurel Garden Club, and was a member of the Laurel Country Club. She is preceded in death by her father George Lowery Clement, mother Annie Dempsey Clement, husband John Jason Harry III, son John Jason Harry, IV, and daughter Carol Harry. Survivors include her son, Eric Harry (wife Marina) of Houston, Texas, and La Jolla, California, and her loving grandchildren Ethan (Boulder, Colorado), Jordan (San Francisco, California) and Jessica Harry (a freshman at Tulane University). To sign the online guest book, visit www.memorychapellaurel.com.

The family of Carolyn C. Harry created this Life Tributes page to make it easy to share your memories.

Send flowers to the Harry family.