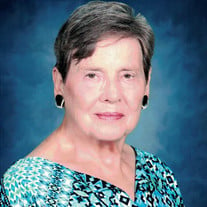 Charlotte Hesler Myrick, 82, was born December 1, 1938 in Laurel, MS, and has passed away to meet her Savior on July 18, 2021 at her residence. She was preceded in death by her parents, Alton and Eva Hesler, her sister Martha Hesler, her loving husband of 61 years, Tinnon G. "Jerry" Myrick, and her oldest son, Tinnon G. "Bo" Myrick, Jr. She is survived by her son, Joel Myrick and twins Amy (Mike) Allen and Chris (Julie) Myrick, eight grandchildren and three great-grandchildren. Charlotte spent much of her childhood at Hesler-Noble Field, where her father Alton was one of the founding pilots. Alton is featured at the history of the airfield exhibit at the new airport terminal. A picture shows Charlotte as a toddler in her father's arms in front of his airplane. She married her high school sweetheart, Jerry Myrick in Columbus, MS on January 18, 1957, as Jerry played football for Mississippi State, and she attended the Mississippi University for Women. They were members of First Baptist Church in Laurel, where Charlotte was a devoted Sunday School teacher for many years. They also facilitated many youth activities and numerous youth mission trips, including to New Mexico, North Carolina, and Tennessee. In 1977, they purchased the Baptist Bible and Book Store in Laurel, and operated it for 44 years, until it closed recently due to Charlotte's declining health. Charlotte and Jerry saw the store as a mission to help bring God's word to many. The beloved store had many loyal customers, including many local churches. The family wishes to recognize Peggy Hodge, Kathy Whatley, Linda Hilbun, Sherry Pearson, and the late Jan Mitchell for their many years as faithful employees. Pallbearers will be: Bobby Stevens, Chris Myrick, Eligah Myrick, William Myrick, Bryars Allen, Myrick Allen, and Joel Myrick. Visitation will take place on July 20th at Memory Chapel in Laurel beginning at 1:00 pm followed by a graveside service at 2:00 pm at Hickory Grove Cemetery. In lieu of flowers, a donation can be made to Southern Care Hospice Services, 4700 Hardy Street, Suite Y, Hattiesburg, MS 39402. To sign the online guest book, visit www.memorychapellaurel.com.

Charlotte Hesler Myrick, 82, was born December 1, 1938 in Laurel, MS, and has passed away to meet her Savior on July 18, 2021 at her residence. She was preceded in death by her parents, Alton and Eva Hesler, her sister Martha Hesler, her... View Obituary & Service Information

The family of Charlotte Hesler Myrick created this Life Tributes page to make it easy to share your memories.

Send flowers to the Myrick family.