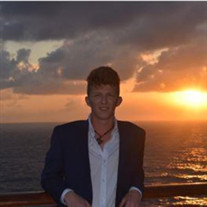 With deepest sorrow, we announce that Conner Reed Landrum, age 21, our beloved son, brother, fiance’, family member and friend passed on Monday, September 7, 2020. Those who knew Conner, even just a little, lost a shining light in their lives. Conner will be missed by his parents Larry (Bo) and Michele Landrum, brother Justin Landrum, his love (fiance’) Victoria McLaurin, his grandmother Lynn Henley and the entire McLaurin family and friends. He was preceded in death by his grandfathers Pete Martin and Robert Landrum. Conner entered this world on April 8, 1999 at South Central Regional Medical Center. During his time here he became an Eagle Scout with Ellisville Boy Scout Troop 10 in 2013. Conner continued in scouting as a camp counselor at Hood Scout Reservation and Camp Tiak. He graduated from Northeast Jones High School in May 2017, and then received his associate degree from Jones Junior College in May 2019. Conner had signed to join the United States Navy and was to depart for training in December. He was a member of Journey Church of Laurel. The last contribution Conner could make was being an organ donor and this he did. He enjoyed the great outdoors, swimming, camping, working on his truck with his brother and dad, and playing video games with Victoria. All things western and cowboy were in his heart. Build Me a Son, O Lord Build me a son, O Lord, who will be strong enough to know when he is weak, and brave enough to face himself when he is afraid; one who will be proud and unbending in honest defeat, and humble and gentle in victory. Build me a son whose wishbone will not be where his backbone should be; a son who will know Thee and that to know himself is the foundation stone of knowledge. Lead him, I pray, not in the path of ease and comfort, but under the stress and spur of difficulties and challenge. Here let him learn to stand up in the storm; here let him learn compassion for those who fail. Build me a son whose heart will be clean, whose goal will be high; a son who will master himself before he seeks to master other men; one who will learn to laugh, yet never forget how to weep; one who will reach into the future, yet never forget the past. And after all these things are his, add, I pray, enough of a sense of humor, so that he may always be serious, yet never take himself too seriously. Give him humility, so that he may always remember the simplicity of greatness, the open mind of true wisdom, the meekness of true strength. Then we, his parents, will dare to whisper, “I have not lived in vain.” (General Douglas MacArthur) Services for Conner will begin at Journey Church 130 Northeast Drive Laurel on Saturday, September 12 at 2 p.m. Graveside services will be at 4 p.m. on Saturday at County Line Baptist Church Cemetery, 3765 Highway 29 South in the Whitfield community. To sign the online guest book, visit www.memorychapellaurel.com.

With deepest sorrow, we announce that Conner Reed Landrum, age 21, our beloved son, brother, fiance&#8217;, family member and friend passed on Monday, September 7, 2020. Those who knew Conner, even just a little, lost a shining light in their... View Obituary & Service Information

The family of Conner Reed Landrum created this Life Tributes page to make it easy to share your memories.

With deepest sorrow, we announce that Conner Reed Landrum, age...

Send flowers to the Landrum family.