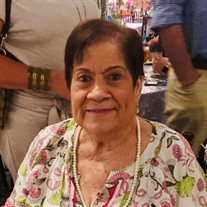 Daisy Louise Carter Burroughs, age 89, passed peacefully into the arms of her Lord and Savior on December 28, 2021. At the time of her passing she was a resident at the Jones County Rest Home in Ellisville, Mississippi. Daisy, as she was known to her many friends, was born in Covington County on August 10, 1932. She was the daughter of Thaddeus G. and Syrentha Gates Carter. She spent her childhood years in Collins and graduated from Collins High School in 1950. That same year she wed Arthur Daniel Burroughs. In the early years of their marriage they moved to Laurel, Mississippi where Arthur established a mechanics business. Together they had five children - four sons and a daughter. As an adult Daisy went back to school and was trained as a Licensed Professional Nurse. She began her nursing career in 1970 at Community Hospital. She then worked for many years at the South Mississippi Charity Hospital. Upon its closing in 1989 she was employed at the Ellisville State School where she worked until her retirement in 1995. Daisy's retirement years were full and happy ones. She spent her days working in her garden, canning fruits and vegetables, fishing in local ponds and creeks, and spending time with her children and grandchildren. She loved traveling and often went to visit children and grandchildren living out of state. She enjoyed going on cruises and took numerous excursions to the Caribbean islands as well as to Alaska. Throughout her life she was a devout Christian, and her family and friends can be comforted that she was assured of her salvation through Jesus Christ. Daisy was preceded in death by her husband of 54 years, Arthur Daniel Burroughs; her parents, Thaddeus Carter and Syrentha Gates Carter; two sisters, Dimple Pace and Christine Price; three brothers, Jack Carter, Jimmy Carter, and Ray Carter; and one granddaughter, Brandy Graham. She is survived by four sons, Wayne (Susie) Burroughs, Robert (Renee) Burroughs, Bo (Beverly) Burroughs, and Stephen Burroughs; one daughter, Rachel (David) Chase; ten grandchildren, Michael (Hilary) Burroughs, Greg Burroughs, Will (Tan) Burroughs, Kerri Burroughs, Kim (Blaine) Holifield, Jessica Dees (fiancée Jeffrey), Joey (Hannah) Burroughs, Julie (John) Gilliland, Erika (Jake) Camacho, and Bailey Burroughs; twenty-one great grandchildren, Carter Burroughs, Henley Burroughs, Payton Burroughs, Watts Burroughs, Laiken Burroughs, Analee Cooley, Madison Harper, Scott Coghlan, Mallory Dees, Maggie Dees, Henson Dees, Olivia Burroughs, Laura Burroughs, Jack Burroughs, Presley Gilliland, Hartley Gilliland, John Knox Gilliland, Destiny Doughty, Zoey Camacho, Paxton Camacho, and Noah Camacho; and three great, great grandchildren, Haylee Cooley, Luna Doughty, and Rory Doughty. The Burroughs family extends heartfelt thanks to the staff at the Jones County Rest Home for the compassionate care they gave "Miss Daisy". Visitation will be held on Friday, December 31, 2021 at Memory Chapel Funeral Home beginning at 9:30 a.m. with the funeral at 11:00 a.m. Burial will follow at Memorial Gardens. Pastor Wally Helfinstien will conduct the funeral. Pallbearers will be Michael Burroughs, Greg Burroughs, Will Burroughs, Joey Burroughs, John Gilliland, and Jeffrey Firment. To sign the online guest book, visit www.memorychapellaurel.com.

Daisy Louise Carter Burroughs, age 89, passed peacefully into the arms of her Lord and Savior on December 28, 2021. At the time of her passing she was a resident at the Jones County Rest Home in Ellisville, Mississippi. Daisy, as she was known... View Obituary & Service Information

The family of Daisy Louise Carter Burroughs created this Life Tributes page to make it easy to share your memories.

Send flowers to the Burroughs family.