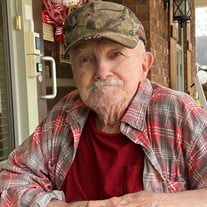 Delma Ray Gatlin, 1/1/1945 – 4/2/2022, passed away at The Care Center of Laurel where he had been a resident for over six years. Mr. Gatlin was loved by the entire staff of The Care Center and was often times spoiled by them. He was considered the resident grandfather and was checked on daily by the other residents as well. He graduated from Sandersville High School in 1964 and went to Jones County Junior College for a year. He joined the Army Reserves in Laurel and honorably served from 1964 – 1974. Mr. Gatlin began his career at Masonite in Laurel, but he spent eighteen years of his life working at Howard Industries in Laurel as a Coil Winder. He retired and became disabled in 1989. Mr. Gatlin enjoyed farming most of his life, raising cows and growing a large garden. He enjoyed hunting, fishing, playing the guitar, singing music, and spending time with family. He also served as minister of Music at Christian Baptist Church in Laurel for a few years. He prided himself with being an avid animal lover and coffee drinker. Mr. Gatlin was preceded in death by his infant daughter Alicia Carol Gatlin; ex-wife Bettye Byrd; father, Jordan “JJ” Gatlin; mother, Wilhemena Clark Gatlin; brothers, Joe, Edward, Garland, Haskell, Nelson, and Jimmie Dale Gatlin; and sister, Nell Brownlee. Mr. Gatlin is survived by his three children, Delena (Jim) Williams, Christie (Dean) Welborn, and Casey Gatlin (Victor); grandchildren, Cody (Kaitlyn) Donald, Jennifer Williams, Kayla (Aaron) Hinton, Katie Welborn, Andrew (Haileigh) Cagle, Maddison Williams, JT Williams, Robert (Destiny) Cagle, Chaz Welborn, and Opal Welborn; great-grandchildren, Winter Donald, Khade Teal, Karmella Cagle, and Sadie Hinton; sister, Thelma “TJ” Locker; and a host of nieces and nephews. A memorial service will be held at a later date, determined by family. In lieu of flowers, the family requests donations to SCAR (Southern Cross Animal Rescue) or your local animal shelter in his name. To sign the online quest book, please visit www.memorychapellaurel.com

Delma Ray Gatlin, 1/1/1945 &#8211; 4/2/2022, passed away at The Care Center of Laurel where he had been a resident for over six years. Mr. Gatlin was loved by the entire staff of The Care Center and was often times spoiled by them. He was... View Obituary & Service Information

The family of Delma Ray Gatlin created this Life Tributes page to make it easy to share your memories.

Send flowers to the Gatlin family.