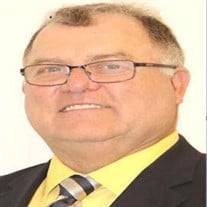 Dennis Joe Bohannon, age 64 of Laurel, MS, was called to his Heavenly Home to be with the Lord on Saturday, November 7, 2020. He was born on March 30, 1956, in Jackson, MS. Dennis graduated from Northeast Jones High School in 1974, attended Jones County Junior College and earned a BA degree from the University of Southern Mississippi. He played football and baseball during high school and junior college. He was former co-owner of KarmelKorn Shoppe / The Popcorn Place in the Sawmill Square Mall for 28 years. He was a retired math teacher and coach for the Jones County School System at West Jones High School. He continued as the football statistician for West Jones High School until his untimely death. Dennis was a very active member of Oakland Grove Baptist Church where he served as Treasurer, Sunday School Superintendent and operated the sound system. He was also an active member of the Gideon’s International and served as the Treasurer for the Laurel North Camp. Dennis is preceded in death by his Father, Aubrey Joe Bohannon. He is survived by his Mother, Jean N. Bohannon, Sister Diane (Kirk) Smith, Brother David Bohannon of Laurel and Sister Donna (Joe) Buckley of Vancleave, MS, Nephews and Nieces include Chad (Terri) Knight of Laurel, Aubrey E. Bohannon of Laurel, Matt (Amber) Buckley of D’Iberville, Andrew Bohannon of Laurel, Tyler (Hannah) Buckley of McHenry, Brian (Georgia) Bohannon of Memphis, Morgan (Daniel) Coats of Clinton, Ben Bohannon of Laurel and Maribeth Bohannon of Laurel, Uncle, Jack Bohannon of Memphis, a host of great nieces and nephews and many close special friends. He was avid sports fan as he followed and supported USM, JCJC and high school sports. He enjoyed spending time with family and friends. Services will be held on Thursday, November 12, 2020, at Oakland Grove Baptist Church. Visitation will begin at 12 noon and the funeral will follow at 2 PM. Pallbearers will be his Nephews. Honorary pallbearers will be members of the Laurel North Camp of the Gideons' International. To sign the online guest book, visit www.memorychapellaurel.com.

Dennis Joe Bohannon, age 64 of Laurel, MS, was called to his Heavenly Home to be with the Lord on Saturday, November 7, 2020. He was born on March 30, 1956, in Jackson, MS. Dennis graduated from Northeast Jones High School in 1974, attended... View Obituary & Service Information

The family of Dennis Bohannon created this Life Tributes page to make it easy to share your memories.

Send flowers to the Bohannon family.