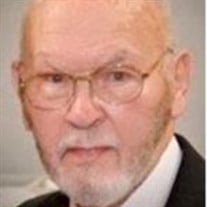 Donald Reeves "Don" Norman, 96, of Laurel, died July 31, 2020 at his residence in Colorado Springs, CO. Mr. Norman was born on March 12, 1924 in Laurel, son of Willis Roy Norman and Beulah Huff Norman. Mr. Norman was a long-time resident of Laurel, an Eagle Scout and a graduate of George S. Gardiner High School. He was a veteran of WWII where he served in the Pacific Theatre with the U.S. Navy. He was a 1950 Graduate from Montana State University where he was a member of the Lambda Chapter Phi Sigma Biological Honor Society and graduated with a BS in Forestry with Honors. Upon graduation he moved to Meridian, MS where he started employment with Masonite Corporation. He was a member of the Society of American Foresters and a Registered Forester in the state of Mississippi and worked for 37 years with Masonite Woodlands and Timber Realization Company prior to retiring. While living in Meridian, he was a member of Highland Baptist Church and served many years as a deacon. Moving back to Laurel in 1971, Don returned to his home church, First Baptist Laurel. While there he served as a deacon, volunteered in the church office and was an integral part of the prayer ministry. Don enjoyed working with wood and was a member of the Pioneer Wood Carvers and Magnolia Woodturners. Additionally, he was very involved in genealogical research and was a member of the Jones County Genealogy and Historical Society and a charter member of Smith County Genealogy Society. Don loved to travel throughout the United States and traveled to most of the national parks. His favorite states for travel were Montana, Oregon, Washington and Alaska. At the age of 85, he participated in a FBC mission trip to Lamaní, Honduras where his granddaughter was serving as a Peace Corps volunteer. Although he was unable to return to Honduras after this trip, it began a long love of the country and the work of the Honduras Baptist Medical/Dental Mission there. He continued to serve by assisting others in their journey to Honduras. He was also involved in work with Jones County Junior College where he established a nursing scholarship in me2mory of his wife. Mr. Norman was preceded in death by his wife of 55 years, Avonne Walsh "Von"' Norman, daughter Ann Norman Wilson, sisters Jean Norman Sumrall, Vida Rae Norman, India Pearl Norman and Opal Norman Foster, and brothers Clark Marx Norman, Ralph Wilbert Norman and Roy Sidney Norman. Mr. Norman is survived by a daughter Donna Norman McCoy of Colorado Springs, CO.; five grandchildren, Leigh Wilson Wolf of Covington, GA., Craig Wilson (Monica) of Miami, FL., Bryan McCoy of Lusaka, Zambia, Erin McCoy of Seattle, WA., and Adam McCoy (Silvania) of Louisville, KY.; six great-grandchildren, Taylor, Will, and Zack Wolf of Covington, GA., Mily and Rachel Wilson of Miami, FL., and Thalia Contão of Louisville, KY.; a brother Joe Norman of Laurel, and son-in-law Bob Wilson (Kay) of Hot Springs, AR.; and a number of nieces and nephews. A virtual memorial service will be conducted by First Baptist Church on Friday, August 7 at 2 p.m. Central Time. The service can be accessed on First Baptist Church Facebook page, https://www.facebook.com/FirstThingsFirstMatthewSix33/. Memory Chapel will provide a private interment in Hickory Grove Cemetery where he will rest next to Von. In lieu of flowers, memorial donations may be made to First Baptist Church Laurel Honduras Medical Dental Missions. To sign the online guest book, visit www.memorychapellaurel.com.

The family of Donald Reeves Norman created this Life Tributes page to make it easy to share your memories.

Send flowers to the Norman family.