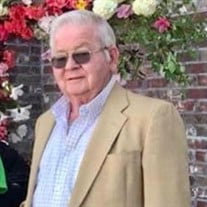 Donald Crawford Rogers, 81, of Laurel, passed away on May 2, 2022. Donald was born on March 24, 1941 to Helen and Crawford Rogers in Laurel. He was a loving son, taking care of his parents until their passing. Donald was the older brother by only one year, to David. This closeness in age also allowed them to grow up having a special friendship. Donald met his true love, Libba, in high school. They were married for 59 years and spent their time working and enjoying their family. He and Libba went on to have two sons, Donald Jr. and James Jason. Besides being a proud father and involved in many of his sons’ hobbies, Donald was also a loving grandfather to Chay, Lawsyn and Chappy Rogers. After Donald graduated from Gardiner High School in 1960, he enlisted in the Army Reserve and became a fireman with the Laurel Fire Department. Donald served as a firefighter many years and was eventually promoted to the position of Captain. Donald had many businesses through the years, Donald Rogers Construction Co. and Helping Hands which he and Libba ran as a transport for the elderly to doctor appointments. Donald was a member of the Masons. He was also passionate about cars, working on rebuilding motors and body work, and also horse riding, Having been raised as a United Methodist, Donald was a member of Justice Heights United Methodist church, serving on many committees, as a deacon until the church closed. He then became a member of Franklin United Methodist Church and served as the building chairman during the construction of the new sanctuary. Donald was predeceased by wife, Libba; brother, David; mother, Helen and father, Crawford; and daughter-in-law, LaShay Rogers, (Jason). He is survived by sons, Don Jr. and Jason; grandchildren, Chason, Lawsyn and Chappy Rogers; and niece, Stephanie Johnson; nephew, Scott Rogers; and sister-in-law, Bennie Rogers. Services will be held at Memory Chapel Funeral Home on Thursday, May 5th at 11:00 a.m. Visitation will begin at 9:30 a.m. Burial will be at Hickory Grove Cemetery in Laurel. Rev. Rodney Smith will officiate. To sign the online guest book, visit www.memorychapellaurel.com.

Donald Crawford Rogers, 81, of Laurel, passed away on May 2, 2022. Donald was born on March 24, 1941 to Helen and Crawford Rogers in Laurel. He was a loving son, taking care of his parents until their passing. Donald was the older brother by... View Obituary & Service Information

The family of Donald Crawford Rogers created this Life Tributes page to make it easy to share your memories.

Send flowers to the Rogers family.