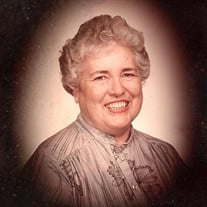 Doris Gandy Morgan passed away peacefully at her home on February 18, 2022 at the age of 98. She was born September 6, 1923 in Laurel and was the loving daughter of Tullie Gandy and Maggie Bell Gandy. On her final day of life she was surrounded by her family who she loved and cherished. She had been a life-long RN at South Central Regional Medical Center until her retirement. After retirement she spent her time caring for her family and tending to her flowers that brought her peace and joy. She was a faithful member of the United Presbyterian Church and a member of the Order of Eastern Star Chapter 35. She was a woman of faith who let the Lord fill all areas of her life and praised him in every moment of her days. She is survived by her children; Lynda Morgan, Barbara Thornhill, Mitchel Thornhill (son-in-law); grandchildren, Chris Lightsey, Nickie Lightsey (granddaughter-in-law), Beth Lightsey, Dustin Gibson (grandson-in-law), Kenny Lightsey, Vera Lightsey (granddaughter-in-law), Bubba Thornhill, Kayla Thornhill (granddaughter-in-law), Crystal West, Mike West (grandson-in-law), Robby White, Heather White, Greg Boutwell, Calvin Lightsey, Leann Herrin (granddaughter-in-law); great grandchildren, Haley Boutwell, Kelsey Boutwell, Gavin Lightsey, Allie Lightsey, Skyler Lightsey, Waylon Lightsey, James Lee Thornhill, Weston Lightsey, Christopher West, Jeffery Dykes, Nathaniel Dykes, Kimberly White, Neveah White, Faith Lightsey, Anna Sellers; and a host of nieces and nephews. She was preceded in death by her husband, Ray Lemuel Morgan; her parents, Tullie Gandy and Maggie Bell Gandy; brothers, Hullon Gandy, John Earl Gandy, Henry Gandy, Doyle Gandy; and sister, Mattie Walters, as well as her great grandson, Braiden West. Family and friends will gather at the United Presbyterian Church in Sandersville for dinner after services. Services will be held at Memory Chapel Funeral Home with visitation on Friday, February 25th from 5 until 7 p.m. and the service following on Saturday, February 26th at 2 p.m. Pastor William “Bubba” Lightsey will officiate. Interment will be at McGill Cemetery. Pallbearers will be Scooter Thornhill, Ricky Strickland, Calvin Lightsey, Dwayne Moss, Mike West and Mathew Holifield. Alternate pallbearer will be Bubba Thornhill. To sign the online guest book, visit www.memorychapellaurel.com.

Doris Gandy Morgan passed away peacefully at her home on February 18, 2022 at the age of 98. She was born September 6, 1923 in Laurel and was the loving daughter of Tullie Gandy and Maggie Bell Gandy. On her final day of life she was surrounded... View Obituary & Service Information

The family of Doris Gandy Morgan created this Life Tributes page to make it easy to share your memories.

Doris Gandy Morgan passed away peacefully at her home on February...

Send flowers to the Morgan family.