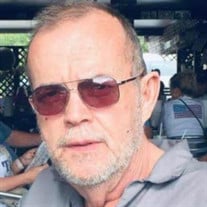 Douglas Wayne Davis, 65, of Laurel passed away August 23, 2021 at his residence. Doug was born on October 28, 1955 in Stamps, Arkansas. His family moved to Sandersville, Mississippi in 1969. Upon his graduation at Northeast Jones High School, Doug enlisted and served in the Army during the Vietnam era. He was well known for his hard work and dedication to his career in the oilfield. As an extremely family oriented man, he tried his best to raise his four children by being an example of well-mannered and respectful behavior. Once his children reached adulthood, he continued to instill those lessons onto his many grandchildren. He was a NASCAR fanatic and a proud supporter of the New Orleans Saints who was honestly just happy he managed to see them have a Super Bowl victory. Doug was preceded in death by his parents, Joseph and Clarabell Davis. Doug is survived by his wife, Kai Davis, his three daughters, Cristy McLean (Matt), Jamie McCullough (Chris), and Kim Nowell, his son, Joey Davis (Emily) and 8 grandchildren. He is also remembered by his siblings, Walter Davis (Debbie), Joe Davis (Andrea), Danny Davis (Janell), Tania Keyes (Dobb), Lynette Husband, and Sallie Mello and a host of nieces and nephews. The pallbearers will be Walter Davis, Joe Davis, Danny Davis, Joey Davis, Dalton McLean, and Devin May. Honorary pallbearers will be Hayden Nowell, Chris McCullough, Milo Brown, Matt McLean, and Jeremy Davis. Visitation will be held at Memory Chapel Funeral Home on August 26 at 12:30 p.m. with graveside services to follow at Memorial Gardens in Laurel at 2:00 p.m. To sign the online guest book, visit www.memorychapellaurel.com.

Douglas Wayne Davis, 65, of Laurel passed away August 23, 2021 at his residence. Doug was born on October 28, 1955 in Stamps, Arkansas. His family moved to Sandersville, Mississippi in 1969. Upon his graduation at Northeast Jones High School,... View Obituary & Service Information

The family of Douglas Wayne Davis created this Life Tributes page to make it easy to share your memories.