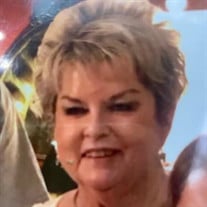 Elizabeth Ann “Libba” Rogers, 77, passed away on November 19, 2021. Libba was a graduate of George S. Gardiner High School and a lifelong resident of Laurel. She was a loving wife, mother, grandmother and friend. On July 9, 1944, Libba was born in Laurel to the late Frank and Mary Parish. After graduating high school in 1961, she married her true love, Donald C. Rogers, and celebrated their 59-year anniversary this year. At Justice Heights United Methodist Church, Libba was a faithful member and passionately worked with youth programs. She later became a member of Franklin United Methodist and continued her work with youth and ongoing worship programs. Balancing motherhood of her two sons, Libba was also a supportive wife and worked alongside Donald as they built Donald C. Rogers’ Construction. They later owned Helping Hands Transport, providing transportation of the elderly to medical appointments. Libba retired from the workforce in her last position as an Administrative Assistant on the Behavioral Health Unit of SCRMC. Libba was preceded in death by her parents, Frank and Mary Parish and daughter-in-law, LaShay Rogers (Jason). She is survived by husband Donald, sons Donald Jr. and Jason Rogers and grandchildren Chay, Lawsyn and Chapman. Visitation will be at 10:00 a.m. at Memory Chapel Funeral Home on Tuesday, November 23, 2021 with services at 11:00 a.m. Rev. James Dobson will officiate the service with burial at Hickory Grove Cemetery in Laurel. Pallbearers include Scott Rogers, Chapman Rogers, Craig Winship, Mike Ruffin, Doug Johnson and Eric Johnson. To sign the online guest book, visit www.memorychapellaurel.com.

The family of Elizabeth Ann "Libba" Rogers created this Life Tributes page to make it easy to share your memories.

Send flowers to the Rogers family.