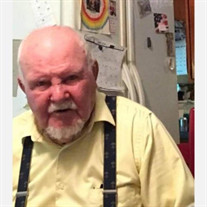 Ellis Johnston, Jr. born June 15, 1932 in Jones County, MS passed from this life on January 17, 2022 at the age of 89. Prior to his retirement, Mr. Johnston was a truck driver for Amerada Hess. He was preceded in death by the mother of his... View Obituary & Service Information

The family of Ellis Johnston Jr. created this Life Tributes page to make it easy to share your memories.

Send flowers to the Johnston family.