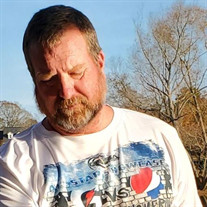 Eric Charles “Tater” Herrington was born in Laurel, Mississippi on April 30, 1968, and passed away on February 5, 2020 at the age of 51. Eric is survived by his wife, Danielle Gregory Herrington, and three sons, Austin Reeves, Ryne Herrington, and Jasper Herrington, all of Laurel. He is also survived by his parents, Stan and Linda Herrington, his sister, Stephanie Herrington, his aunt, Jackie (Ron) Panda, his mother and father-in-law, Kris and Jerry Welch, his brother-in-law, Brandon (Mary) Gregory, his brother-in-law, Mark Sellers, his nephew, Ethan (Hannah) Gregory, his niece, Chloe Gregory, and his great-niece, Kaisley. He was preceded in death by his grandparents, Jack and Elizabeth Herrington, and C.A. and Pheobe Rowell. Eric was employed as a safety manager with Tanner Construction. He was a graduate of Northeast Jones High School and Mississippi State University. Eric loved to hunt, fish, and spend time with his three boys. He coached baseball for all three of his son’s teams. Eric loved being “Coach” for his sons, as well as the many players he coached throughout the years. Visitation will be held at Memory Chapel on Saturday, February 8th from 5:00 pm – 8:00 pm. The funeral will be held at First Baptist Church of Laurel on Monday, February 10th, at 10:00 am, and will be officiated by Dr. Randy Turner. Burial will be in Memorial Gardens in Laurel. Pallbearers will be Corey Dykes, Kyle Howell, Reggie Holifield, Lou Lowe, Greg Rowell, and Chad Sumrall. In lieu of flowers, the family request donations be made to the Laurel Jones County Dixie Youth Baseball program. To sign the online guest book, visit www.memorychapellaurel.com.

Eric Charles &#8220;Tater&#8221; Herrington was born in Laurel, Mississippi on April 30, 1968, and passed away on February 5, 2020 at the age of 51. Eric is survived by his wife, Danielle Gregory Herrington, and three sons, Austin Reeves,... View Obituary & Service Information

The family of Eric Charles "Tater" Herrington created this Life Tributes page to make it easy to share your memories.

Send flowers to the Herrington family.