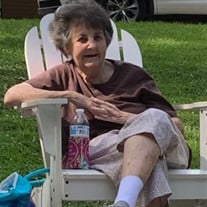 Evelyn Stringer Stevens, 85, of Laurel, passed away peacefully Saturday, September 14, 2019. Born on February 16, 1934 in Smith County, Evelyn was the third of four children. She graduated from Ellisville High School then went on to get married in June of 1956. She worked as an assistant school teacher at Nora Davis Elementary School and Lamar Elementary until she retired in 1994. In her younger years, Evelyn enjoyed playing bingo, needlepoint work and ceramics. She liked to cook and was famous within the family for her chocolate pie. In more recent years, she spent a lot of her time loving on her two little puppies, Girl and JoJo. She loved listening to Elvis’ music, watching hummingbirds from the kitchen window and she always had room in her lap for one of her great-grand babies. She was a long-time member of Trinity Baptist Church. Mrs. Stevens was preceded in death by her parents, Luver and Naomi Stringer, beloved husband, Conner Stevens, and sisters Nancy Stringer Sanders and Elaine Stringer Brown. Survivors include her brother, Darrell Stringer of Laurel, son, Michael Stevens of Laurel, daughter, Michele Stevens Harper (Pete) of Yazoo City; grandchildren, Lauren Bean (Danny) of New Market, Alabama, Todd Stevens (Sara) of Laurel, Meredith Crawford (Alex) of Yazoo City, Claire Harper and fiancé Will Manor of Yazoo City, and Kendall Bové (John) of Laurel along with 4 great grandchildren; Brody, Jaxon, Avery, and Brayden. She is also survived by a host of nieces and nephews. Visitation will be from 5 pm - 8 pm on Sunday, Sept. 15 at Memory Chapel Funeral Home. The funeral will be held Monday, Sept. 16 at 10 AM at Memory Chapel Funeral Home with burial to follow in Hickory Grove Cemetery in Laurel. Brother Bob Taylor will officiate. Pall Bearers will be Alex Crawford, Will Manor, Billy Sanders, Jerry Stringer, Jimmy Dale Stringer, and Johnny Stringer. Memory Chapel Funeral Home in Laurel, MS is entrusted with the arrangements. To view and sign the online guestbook, visit www.memorychapellaurel.com

Evelyn Stringer Stevens, 85, of Laurel, passed away peacefully Saturday, September 14, 2019. Born on February 16, 1934 in Smith County, Evelyn was the third of four children. She graduated from Ellisville High School then went on to get married... View Obituary & Service Information

The family of Evelyn Stringer Stevens created this Life Tributes page to make it easy to share your memories.

Send flowers to the Stevens family.