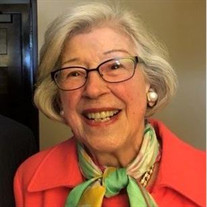 Gene Robin Gilchrist residing in Brentwood, TN for the past 12 years passed away peacefully on November 6, 2019. Born in Jackson, Mississippi Mrs. Gilchrist lived in Bay St. Louis, MS and moved to Laurel, MS in 1952. She attended Gulf Park High School, Converse College, Louisiana State University and received her Bachelor of Business Administration from Tulane University. In Laurel, she assumed her role as a member of a prominent pioneer family and generously contributed her time and energies to the religious and cultural growth of Laurel. She was a devoted member of St. John's Episcopal Church where she served two terms as president of the Episcopal Church Women. She also served as president of the Laurel Garden Club and as a member of the Garden Club of America and its many endeavors. She was a past member of the Laurel Arts League and a former docent of the Lauren Rogers Museum of Art Mrs. Gilchrist was a Vice Regent for Mississippi of the Mount Vernon Ladies Association of the Union from 1974 until 1990 when she was elected Vice Regent Emeritus. She was also a member of the National Society of the Colonial Dames of America in Mississippi and the Order of the First Families of Mississippi. She held membership in the Society of Mayflower Descendants in the State of Mississippi. Mrs. Gilchrist was the epitome of grace and dignity, and a role model to those fortunate enough to share her company and delight in her always warm welcome and sweet smile. She and her husband, Stewart, of 62 years were gracious fun-loving hosts to all. She is preceded in death by her husband, Stewart Jones Gilchrist, Laurel, MS. She is survived by one son, Frank W. Gilchrist, Brentwood, TN; three daughters ; Mary Gilchrist Stinson(Tim),Brentwood, TN; Margaret Lee Gilchrist Justice(David), Panama City, FL; and Sara Gilchrist Goodwin, Roswell, GA; one brother, Theodore Tydings Robin(Helen), Birmingham, AL; seven grandchildren, William Gilchrist Stinson (Bessie), McLean Timothy Stinson, Karleen Elizabeth Justice, Gene Tallman Justice , Katherine Geales Rawe (Craig), Grace Tydings Goodwin and Andrew Gilchrist Goodwin; one great grand daughter, Julie Hunter Stinson and a number of nieces and nephews. Memorials may be made to the Laurel-Jones County Library Association or Eastman Memorial Foundation. Services will be held at St John's Episcopal Church, Laurel, MS on March 7th. Visitation at 10:00 followed by the service at 11:00 and internment at Lake Park Cemetery. To sign the online guest book, visit www.memorychapellaurel.com.

The family of Gene Robin Gilchrist created this Life Tributes page to make it easy to share your memories.

Gene Robin Gilchrist residing in Brentwood, TN for the past 12...

Send flowers to the Gilchrist family.