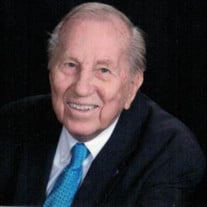 George Irving Melichar, age 93, passed away on March 7, 2020, in Laurel, MS. Visitation will be held Thursday, March 12, from 10:00-11:00 a.m. at First United Methodist Church, Laurel, MS, with service to follow at 11:00 a.m. George was born July 21, 1926, in Berwyn, Illinois, the son of Emily and Henry Melichar. His life was defined by his love of God, family and country. George was a WWII and Korean war veteran. He was a 1947 graduate of the Merchant Marine Academy and received the commission of Ensign in the U.S. Maritime Service and U.S. Naval Reserve. During WWII he served with the Merchant Marines in delivering ammunition and war supplies to Okinawa. George later volunteered for naval service where he served in San Diego as Executive Officer of the USS Koka. He often said "Some of the best years of our lives were spent here." After moving to Laurel, he continued to serve as Commanding Officer in the Surface Division Naval Reserves. George was a 1951 graduate of Ole Miss where he met his beloved wife of 68 years, Marie Stokes. Special memories include friendships made through SAE fraternity and Rebel sports. His passion for all things Ole Miss continued throughout his life. George and Marie settled in Laurel in 1954, where he began his career as an underwriter with Lincoln National Life Insurance Co. While George was one of the most successful agents with the company, he considered his 32-year career more than a job. In fact, he would say "I feel very good that I have helped families and businesses create lasting financial security." An annual qualifier for sales honor clubs, including attaining life membership in the Million Dollar Round Table, George was also featured in Time magazine for insurance production in the company's Top 1% Club. He was active in many professional insurance organizations. With a happy heart, George generously helped others wherever he saw the need. As a loyal and faithful member of Laurel First UMC for 66 years, George dearly loved and supported his church. Always willing to volunteer his time, he was chairman of LFUMC Administrative Board, president of the Exchange Club, board member of both the Salvation Army and Laurel Country Club. George and Marie cherished their family and the time they spent together. Summers spent at Perdido Key with their children and grandchildren were a highlight of their lives. In the past year, they experienced the joy of having great-grandchildren. George's hobbies were varied, from golf to keeping up daily with current events to traveling. He and Marie enjoyed business convention trips and later trips abroad. A special memory was their visit to the Czech Republic to discover more about George's ancestry. George was known to say "I thank the good Lord for what little success I've achieved." He has always felt grateful for his blessings of family, friends, and good health. He was preceded in death by his parents, Dr. and Mrs. H.S. Melichar and his brother, Henry Melichar. George is survived by his wife, Marie Stokes Melichar, his daughters, Marcia (Steve) Whatley of Madison, Leah (Glenn) Campbell of Hattiesburg, grandchildren, Steven (Rebecca) Whatley, Jennifer (Jake) Vaughn, Michael Campbell, Chris Campbell, great-children, Hank Vaughn and Logan Whatley, and a most special family friend and assistant, Cheryl Sumrall, who George referred to as "his angel." Memorials may be made to Laurel First UMC, 420 N. 5th Ave., Laurel, MS 39440 or a charity of your choice.

The family of George Irving Melichar created this Life Tributes page to make it easy to share your memories.

Send flowers to the Melichar family.