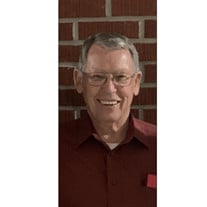 Heaven was rejoicing the morning of June 11, 2021, as George Terrell "Terry" Miles arrived home. He was greeted by members of his family who preceded him there, including his wife of 42 years, Patricia Kirkland Miles; his parents, Rev. George and Edna Ruth Vinson Miles; and two grandchildren, Charlie Bell Dickerson and Braxton Luke Dickerson. Terry was born October 11, 1944, in Laurel, where he lived most of his life. He was a graduate of George S. Gardner's High School, and went on to further his education at William Carey College in Hattiesburg and Westminster College in Tehuacana, Texas. He later enlisted in the National Guard and worked as manager for the local Firestone Store and then worked at Southern Tire Mart. Store until his retirement. Terry was active in church, serving on the board of stewards, as treasurer, deacon, as well as other capacities at Mount Vernon Congregational Methodist Church, and then, for the last several years, as deacon at Journey Church. He was a dedicated and devout follower and servant of God and was recognized as a trustworthy man of impeccable character and integrity. Terry had a passion for working at the church and helping others. He helped maintain the church lawn with pride and filled in everywhere he could there. He had a great sense of humor and enjoyed daily morning coffee with his buddies. Second only to God on Terry's list of priorities was his family. Looking forward to one day joining him in heaven are: His two daughters, Tera Tisdale (and husband Mike) of Moselle, and Jodi Dickerson (and husband Bruiser), of Laurel; and one son, Ryan (and wife Amber) also of Laurel; eight grandchildren, Ethan Tisdale and Addie Tisdale of Moselle, Bella Lucy Dickerson and Patti Clair Dickerson of Laurel, Amry Rose Miles, Anley Ryan Miles, Kampbell Miles, and Kirkland Miles, of Laurel. Terry is also survived by one brother, Greg Miles (and wife Renee) of Clinton; two sisters, Linda Davis of Laurel and Ladonna Odom of Grand Saline, Texas, a host of siblings-in-law, nieces, nephews, friends, and family friend Cindy Herrington of Laurel. Pallbearers are: Michael Garcia Adron Presley John Jefcoat Blain Thatch Michael Helton Chris Davis Pastor is : Bro Robby Johnson Services are at Journey church and burial at Mt Vernon Church To sign the online guest book, please visit www.memorychapellaurel.com

Heaven was rejoicing the morning of June 11, 2021, as George Terrell "Terry" Miles arrived home. He was greeted by members of his family who preceded him there, including his wife of 42 years, Patricia Kirkland Miles; his parents, Rev. George... View Obituary & Service Information

The family of George Terrell Miles created this Life Tributes page to make it easy to share your memories.

Send flowers to the Miles family.