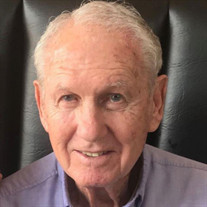 On May 26, 2020, Gosby Joe “GJ” Thompson of Laurel passed away peacefully in his sleep with family by his side. A devoted husband and father, a longtime Laurel business owner, a cattle farmer and prolific gardener, and a humble man with an affinity for contemplation, Thompson’s legacy proves difficult to embody in a few short paragraphs. Instead, Thompson’s true legacy lives on in the many lives he impacted during his beautiful, God-fearing life. Mr. Thompson owned and operated Thompson’s Barber shop across from South Central Regional Medical Center in Laurel for over 40 years. Thompson also served his country for 2 years in the Navy Reserves and then for 4 years in the Air Force as Airman 1st Class, Radar Operator during the Korean Conflict in Anchorage, Alaska. Mr. Thompson was a loving husband, father, and grandfather. He met his wife Janice in junior high school, and they were sweethearts all the way through Gardiner High School. Mr. Thompson’s humility was especially evident in his relationship with his wife, Janice. Married for 69 years, his devotion to her was unmatched. Theirs will remain an example of a godly marriage for generations to come. Mr. Thompson was also an active member of West Laurel Baptist Church all his life, where he served his Lord and church family. Throughout his life, Mr. Thompson remained grateful for God’s blessings. Even while working long hours as one of the city’s most beloved barbers, he also loved raising cattle for the business he owned with his brother Herbert Thompson, “Double T Limousine Farm”. In his retirement, Mr. Thompson, could be found napping on his porch swing. Yet, he was always ready and willing to offer a haircut to family or close friends. Easy going and mild mannered, Gosby was never bothered, except when others were focused on him (in fact, he would be bothered to know that any of us spent time on his obituary). With a servant’s heart, he was motivated by making the lives of others easy to navigate. As a young man, Mr. Thompson, “Dig”, excelled on the baseball field as a pitcher for the semi-professional Laurel Orphans. Later in life he developed a love for golf and even (famously) made a hole-in-one at the Dixie Golf Club, where he was a charter member. He also enjoyed fishing and hunting, but his favorite place to enjoy God’s creation was the beach at Gulf Shores, Alabama. Mr. Thompson would often say, “If ya’ll get to looking for me, I’ll probably be down here on the beach somewhere.” Anyone who knew Thompson knew him as a thinker. No doubt someone reading this obituary battled him in a week long chess match down at Thompson’s Barber Shop. He is a treasured soul and will be sorely missed by his family and friends. Thompson is preceded in death by his father Otis Thompson, Step Father Bill Martin, Mother Mae Landrum, and Step Mother Hazel Martin. He is also preceded in death by three sons, Larry, Gary and David. He is survived by his wife of 69 years, Faye Janice Thompson, brother Herbert Ray (Joyce) Thompson, daughter Karen (Ken) Swager, Son Larry (Dora) Thompson, Daughter Kathy (Glenn) Smith, Five grandchildren Kelsey (Sean) Dobbins, Casey (Grace) Johnson, Nathan (Meryl) Johnson, Christopher (Linsey) Thompson, Tyler Thompson and seven Great-Grandchildren: Juniper Dobbins, Caleb Johnson, Evelyn Johnson, Kent Johnson, Emery Thompson, Aiden Thompson and Ryleigh Thompson. Due to the COVID-19 Pandemic, services for Mr. Thompson will be graveside only at Hickory Grove Cemetery in Laurel on Monday June 1, 2020 at 10:00 am. Rev. Steve Jackson of West Laurel Baptist Church will officiate. To sign the online guestbook, visit www.memorychapellaurel.com

On May 26, 2020, Gosby Joe &#8220;GJ&#8221; Thompson of Laurel passed away peacefully in his sleep with family by his side. A devoted husband and father, a longtime Laurel business owner, a cattle farmer and prolific gardener, and a humble man... View Obituary & Service Information

The family of Gosby Joe "GJ" Thompson created this Life Tributes page to make it easy to share your memories.

Send flowers to the Thompson family.