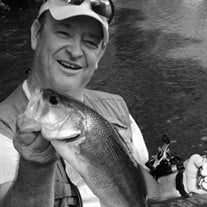 Hullen “Wallace” Beasley passed away on Wednesday, August 26, 2020 after complications from COVID-19. He was 69 years old. Wallace was a very outgoing, thoughtful, compassionate follower of Jesus Christ whose colorful personality was represented by the many different titles that he was known by to the many different people that he came into contact with. “The Preacherman”, “Sparky”, “Hullen”, “My Busdriver”, “the substitute”, “the blind referee”, “Wallace”, “Daddy”, “Pops”, and “Pepaw” are just a few of the many different titles that he was known by in his sphere of influence. “The Preacherman” was called into full-time Gospel evangelism in 1974 and faithfully served as a lead pastor at 6 different churches during the course of his 50 years of earthly ministry. He was known to loyally visit shut-ins and care for individuals who were less fortunate. More recently he was serving as the interim pastor for Tallahoma Baptist Church in Laurel, MS. Wallace was a certified welder that was formally trained in the apprenticeship program at Ingalls Shipyard in Pascagoula, MS. He later went on to bi-vocationally perfect his craft at the Howard Industries Company in Ellisville, MS for years. He utilized these welding skills to perform various odd jobs within the community and it was there that he earned the beloved title “Sparky.” In his spare time, “Ole Hullen” as he was called by his favorite fishing partners, liked to fish. He would travel to lakes and ponds all over Mississippi and Alabama in search of “Ole Ned”. On one occasion, as a testimony of his love for Christ, Wallace’s tacklebox flew out of the boat that he was pulling driving home. It was later returned to him by the person who found it because they found his name written inside a New Testament Bible that he kept inside of it. In his later years, Wallace served in the Jones County School system in a number of ways. He was a beloved elementary and high school bus driver. Oftentimes, he would bring personalized gifts for all of the children on his route. Wallace also worked as a substitute teacher in the classroom and thoroughly enjoyed refereeing in the Mississippi High School Athletic Association. Wallace was preceded in death by his wife of 50 years Debra Beasley. His father and mother Leon and Virginia Angeline Beasley and brother Robert Beasley. He is survived by his children Jennifer Kizzar, husband Jerry, Scott Beasley, wife Rachel and Benjamin Beasley, wife Jaime. Two brothers Kenny Beasley, wife Jennifer and Royce Beasley, wife Maribel. His grandchildren Brock Kizzar, wife Madison, Brittney Kizzar Smith, husband Justin. Isaiah, Hannah, and Emma Beasley, Addison and Jonah Beasley, and great grandchildren Gracyn Smith and Aiden Kizzar and a host of nieces and nephews. Services will be on August 29, 2020 as follows: Visitation is at Salem Heights Baptist Church from 10:30 – 11: 30 AM. Due to the unique circumstances, a formal viewing will not be available. After visitation, a memorial service celebrating Wallace’s life will begin at 11:30 AM. Graveside ceremony will be at 1 PM at Lake Park Cemetery in Laurel, MS. Please send any memorial donations to the St. Jude Children’s Research Hospital, 501 St. Jude Place, Memphis, TN 38105. To sign the online guest book, visit www.memorychapellaurel.com.

The family of Hullen "Wallace" Beasley created this Life Tributes page to make it easy to share your memories.

Send flowers to the Beasley family.