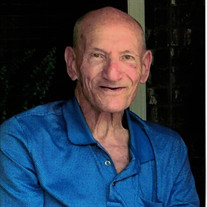 James Leonard (Jim) Davis peacefully passed from this life to be with Jesus on June 27, 2020 at 83 years of age. He was born October 10, 1936 to Travis and Betty Catherine Davis of the Myrick community. He was preceded in death by his beloved wife Shirley Welch Davis, loving son: Joseph Curtis Davis, Granddaughter Callie Allyn Davis, brothers; Pete, Fred, Ben, Pat and Melvin Davis and a sister; Miriam Thomas. Left to cherish his memories are his beloved children; Teresa (John) McNeil, Jeff (Sherry) Davis, and Mike (Lee Ann) Davis. Grandchildren; Bridget Melton, Chase Davis, Kashay Sullivan, Chance Davis, Tasha Davis, Haydon Davis, and Keagan Davis. Great grandchildren; Kaine Nichols, Conner Melton, Carter Melton, Claire Boutwill, Kynlie Anderson, Braylon Davis, Kullen Sullivan, Kolt Sullivan, Oaklyn Davis, Hawk Davis, Dawson Brewer, Nattalie Welborn, Marlee Welborn, Charlee Davis. Brothers; Lewis (Betty) Davis and Lester (Linda) Davis. He was an Army Veteran. After serving his country, he retired from the oilfield. He was a member of the Clyde Howard Lodge#0525 Jim was a hard worker and sitting idle wasn’t an option. Always willing to lend a helping hand even as his body became frail in his later days, he would always ask, “can I help in anyway”? He enjoyed hunting and fishing to the fullest. He was a member of Little Tiger Creek Hunting Club. There he was known as “Sawbriar” and for certain, “Sawbriar” left many fond memories at the deer camp. Graveside services will be held Monday, June 29, 2020 at 10:00 a.m. at Myrick Cemetery. Rev. Robby Johnson will officiate. Our heartfelt appreciation and gratitude is extended to the loving friends as well as the dedicated professionals of Laurelwood and Compassus Hospice. We would like to extend a personal thank you to Quay Miranda, who referenced our Dad as her baby. Pallbearers will be; Mike Davis, John McNeil, Chase Davis, Chance Davis, Kaine Nichols, Keagan Davis. Honorary pallbearers; Leroy Sullivan and Mike Donald. “So with you: Now is your time of grief, but I will see you again and you will rejoice, and no one will take away your joy.” John 16:22 We will miss you dearly POP. Until we meet again. To sign the online guest book, visit www.memorychapellaurel.com.

James Leonard (Jim) Davis peacefully passed from this life to be with Jesus on June 27, 2020 at 83 years of age. He was born October 10, 1936 to Travis and Betty Catherine Davis of the Myrick community. He was preceded in death by his beloved... View Obituary & Service Information

The family of James Leonard Davis created this Life Tributes page to make it easy to share your memories.

James Leonard (Jim) Davis peacefully passed from this life to...