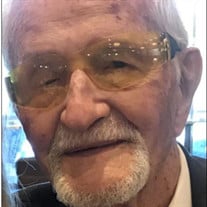 James Ely King Jr., 100, died Friday, March 26, 2021, at Comfort Care Nursing Center. A private graveside will be held for the family. James was born in Lockhart, Mississippi and raised in Heidelberg, Mississippi. He graduated from Heidelberg High School in 1938, attended Jones Junior College for one year and graduated from Ole Miss in 1942, with a degree in Chemistry and Geology. He received his Chemical Engineering degree from the University of Tennessee. During World War II, he worked as a chemist for the Atomic Energy Commission on the Manhattan Project at the Y12 plant in Oak Ridge, Tennessee. In 1946, he moved to Port Arthur, Texas, with his wife, Louise, a fellow chemist, where he worked as a Chemical Engineer at Jefferson Chemical Company, a subsidiary of Texaco. They raised 2 daughters. He was a small business owner in his hometown of Groves and was former President of the Groves Jaycees. James was also a lifelong member of the American Chemical Society. Upon his early retirement, he and Louise moved to Mississippi where he worked closely with his brother, Julius, in the oil business, timber industry and real estate. He was Tree Farmer of the Year for Jasper County. He and Lou established a scholarship at the Heidelberg Methodist Church for senior students. With other family members, the J. E. King Scholarship was established at JCJC. At Winthrop University, South Carolina, his wife's alma mater, an endowment was given to fund a scholarship for students majoring in the sciences. James and his brother, Julius, provided seed funds for the building of the King Chemistry Center at JCJC. James King was an inventor who loved to tinker and build, and he played a substantial role in the upbringing of younger family members. He was beloved for his wry sense of humor and keen observations about the world. He was preceded in death by his wife Louise Thornton King, his brother, "Judy," as he was affectionately known, his sister, Doris "Dot" Carlisle, granddaughter Allison Hall Nelson, and a double first cousin, Jeanette King Howell. Jim is survived by daughters, Jean King Haltom and her husband, Dayne, of Laurel, and Kay King Hall and her husband, Lewis, of Sarasota, Florida; and grandchildren Jayne Haltom Goodman and husband, Matt, of Houston, TX, Dayne Haltom, Jr. and wife, Elisha, of Laurel, MS, and Ann Rainey Haltom Propst and her husband, Charles, of Denver, Colorado, Emily Hall of Tampa, Florida, and Miles Hall of Sarasota, Florida. His great grandchildren are Elle and Gwen Goodman, Devon Haltom, Louis and Gwendolyn Propst. He is also survived by his brother-in-law, Roy Thornton, of Spartanburg, South Carolina and nieces Mary Ann Carlisle Blanchette and her husband, Jon, of Bay St. Louis, Mississippi, Lindy King Penny and her husband, Bill, of Fort Worth, Texas, and Kendall King Waggoner and husband, Keith, of Dallas, Texas, and cousin, Dot Till Lesniak, of Laurel, Mississippi, along with many great nieces, nephews, and cousins. Memorials may be made to Jones College, the University of Mississippi, or to the designee of the donor's choice. To sign the online guest book, visit www.memorychapellaurel.com.

James Ely King Jr., 100, died Friday, March 26, 2021, at Comfort Care Nursing Center. A private graveside will be held for the family. James was born in Lockhart, Mississippi and raised in Heidelberg, Mississippi. He graduated from Heidelberg... View Obituary & Service Information

The family of James Ely King Jr. created this Life Tributes page to make it easy to share your memories.

Send flowers to the King family.