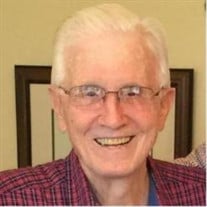 James Walton Harvey, 88, of Laurel, MS lost his 10 year courageous fight against Alzheimer’s and departed this life to be with his Lord and Savior, Jesus Christ, on August 11, 2021 after a brief stay at the South Central Regional Medical Center. A visitation will be held at Memory Chapel Funeral Home in Laurel on August 14 at 9:00 a.m. followed by the funeral service at 10:00 a.m. in the chapel. Interment will be at Hickory Grove Cemetery in Laurel after services are concluded. James was born in Covington County, Mississippi on September 14, 1932. After serving his country in the Marine Corps, he moved to Laurel and married his loving wife, Barbara Sharpe Harvey, where they lived happily for over 65 years. He was a member of Highland Baptist Church and a Shriner, Mason and member of the American Legion. James spent almost his entire professional career as a salesman for Colonial Baking Company until his retirement in 1993. He then worked in merchandising for various bread brands stocking shelves in most grocery stores located in Laurel. Always friendly and gregarious, James had a passion for being kind and helpful to people and became affectionately known by many as “The Bread Man”. He believed his greatest accomplishment was creating a stable and happy family. He worked tirelessly to provide opportunities for his pride and joy and only child, James Timothy (Tim) Harvey, who currently resides in Germantown, TN with his wife Nancy. James was a supportive and loving father who encouraged his son to pursue his educational and athletic dreams, while instilling in him all the lessons for a successful life. James adored his wife and often said that she was a great woman that made him into a good man. He loved his two grandchildren, Bryan T. Harvey of Austin, TX and Brandon A. Harvey and wife Jana of Memphis, TN, with all his heart. He was preceded in death by his parents, Mildred L. Walters and Travis L. Harvey, his brother, John H. Walters, and sister, Betty E. Parker. He is survived by his wife, son, two grandsons, daughter-in-law, brother Michael W. Walters and wife Paula of Laurel and numerous nieces and nephews, all of whom he loved deeply. Pallbearers will be Bryan Harvey, Brandon Harvey, Michael Walters, Shane Walters, Scott Walters, and Virgil Darnell. In lieu of flowers, the family requests honoring James with a donation to one of the following charities: Delta State University Foundation and its Baseball Athletic Scholarship fund at P O Box 3141, Cleveland, MS 38733, Jones College Foundation and its Mildred Lee Walters Nursing Scholarship at 900 S. Court St, Ellisville, MS 39437, or Alzheimer’s Association P O Box 96011, Washington, DC 20090-6011. To sign the online guest book, visit www.memorychapellaurel.com.

James Walton Harvey, 88, of Laurel, MS lost his 10 year courageous fight against Alzheimer&#8217;s and departed this life to be with his Lord and Savior, Jesus Christ, on August 11, 2021 after a brief stay at the South Central Regional Medical... View Obituary & Service Information

The family of James Walton Harvey created this Life Tributes page to make it easy to share your memories.

Send flowers to the Harvey family.