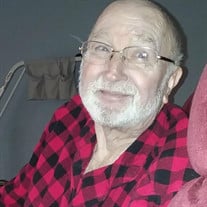 Jesse Renfrow was born in Houston, Texas on February 23, 1935. He was the 1st child of Jesse Monroe Renfrow and his wife Elenora Holland, both of Jena, Louisiana. Jesse's name was to be Jesse Monroe Renfrow Jr. A clerical error at the hospital typed his name as Jesse M. Renfrow. So that is his true name! He was known as Ranger while growing up. Jesse was raised in Jena, Louisiana along with his other siblings, the late Jack Renfrow of New Orleans, Louisiana, the late Sam (Dee) Renfrow of Sterling, Alaska, the late Jerry Renfrow of Harlingen, Texas, Don Renfrow of Rock Port, Texas and his sister Shirley Renfrow of Jena, Louisiana. After Ranger turned twelve, his daddy, Jesse Monroe Renfrow passed away with complications from tuberculosis. Ranger had to help raise his brothers and sister at such a young age. After his graduation from Jena High School in 1953, he went to work. He worked as a truck driver, TV repairman, and a janitor at an auditorium where he met and become friends with Elvis Presley. Jesse eventually found the job that would start his career. He got a job on a drilling rig in south Louisiana as a worm floor hand! He quickly graduated to derrickman, a position he held for many years. He chased those rigs around all over south Louisiana and Texas for a spell. In 1965 he met his wife to be of 37 years, Robbie Pugh, around Alice, Texas. After they were married, they decided to move to Alaska. Jesse's rig experience landed him a job with Reading and Bates, and he got a derrick job on the Dillion platform, Cook Inlet, Nikiski, Alaska in 1966. He roughnecked for another year or so and hired on with Wagley Inc. out of Kenai, Alaska. This opened the door for a job with ARCO Alaska. He started out on the Spark platform as a Production Operator. Eventually he would become the Production Foreman on various ARCO Alaska sites. The King Salmon Platform, Swanson River Oilfield, North Slope of Alaska and at Beluga, as well as an Arco site in the Gulf of Mexico 60 miles offshore from Venice, Louisiana. Jesse spent 30 years with ARCO and took an early retirement with them. I have men and women that tell me all the time "Your Dad was the best man I ever worked for!" He did have a fantastic mannerism that made him a joy to be around. Jesse and Robbie raised six children in the Sterling Area on the Kenai Peninsula, Sterling, Alaska: their 1st son Jesse Wayne of Big Lake, Alaska, 2nd son Brandy of Corpus Christi, Texas, 1st daughter Leana of Sterling, Alaska, 2nd daughter Anita of Ventura, California, 3rd son Mark of Kenai, Alaska and 3rd daughter Cricket of Soldotna, Alaska. Jesse worked half of his life away from home, he made a good life for all of us. It was a real joy when he got home from work. He loved taking drives out in the wilderness at that time, Swanson River Road and Skilak Road were a few. There were lots of river trips. He was also a hard worker. He loved building things and that is where I got my skills! He was always teaching us something. He taught us all to drive at a young age and taught us gun safety. I was hunting by myself when I was eleven because of him. He trusted me! Jesse also loved to help others. If someone needed help, all they had to do was ask. He told me over and over "If you see someone in need, stop and lend a helping hand!" When Jesse mowed his yard or snow blowed his drive way, his neighbors got theirs done also, especially the elderly. After Robbie passed in 2003, Jesse sold his Sterling home and moved to Kenai. After ten years of him living with his dog that he truly loved, he met the lady that led him to Jesus Christ, Lois Ann Landrum, of Laurel, Mississippi. He sold all he had and gave the rest to his children and grandchildren, and moved to Mississippi and took her to be his wife on June 9, 2014. Jesse took ill and had to move into a nursing home. He was diagnosed with diabetes years ago and had managed with it well until recently. Dad was really happy living at Miss Dottie’s. She and her staff took very good care of him. Thank you for that. The morning of January 17, 2022, Jesse was called back to Jesus. You are certainly going to be missed, you were my hero. Jesse leaves behind 16 grandchildren and 24 great grandchildren. The last time I talked with my Dad, he told me "Tell all my grandbabies that Papa loves em.". Wayne Renfrow

Jesse Renfrow was born in Houston, Texas on February 23, 1935. He was the 1st child of Jesse Monroe Renfrow and his wife Elenora Holland, both of Jena, Louisiana. Jesse's name was to be Jesse Monroe Renfrow Jr. A clerical error at the hospital... View Obituary & Service Information

The family of Jesse M. Renfrow created this Life Tributes page to make it easy to share your memories.

Send flowers to the Renfrow family.