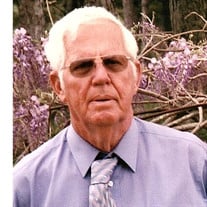 Jessie Neil Blackwell August 4, 1935 – February 22, 2022 Born in Memphis, Tennessee to Allie Blackwell and Purvis Blackwell. After birth he relocated to Mize, where he continued to grow up. He returned to Laurel and attended George S. Gardiner High School. In 1956 he joined the U.S. Navy and served until 1958 on the U.S. Lowe Destroyer during the Korean War. He also hauled oil for Texaco, and finally retired from Laurel Machine and Foundry. In 1958 he married Rose Hankins and they shared 64 years of marriage. They were blessed with two sons, John Blackwell, Brent (Kelly) Blackwell, and one grandson, Jonathan (Jessica) who was the light of his life. He served as deacon at multiple churches for 50 years until his health became too bad. Teaching Sunday school and working with senior citizens driving the bus for all of their outings, and trips. He was preceded in death by his mother, Allie Blackwell, his father Purvis, his sister, Vera Lee Landrum, and Annie Louis Blackwell. He is survived by his wife Rose, his sons, John and Brent, grandson Jonathan, sisters, Mildred Henderson, and brother Melvin, wife Pat of Louisiana. The funeral service will be at Sharon Baptist Church with the Reverend Matt Olson serving as pastor at 10:00 AM, with interment in Sharon First Baptist Church Cemetery, on Friday, February the 25th. Memory Chapel Funeral Home is in charge of the arrangements. Pallbearers include, Atley Ledlow, Terrell Yarbrough, Howard Sims, Larry Welborn, Jason White, and George Walters. To sign the online guest book, please visit www.memorychapellaurel.com

Jessie Neil Blackwell August 4, 1935 &#8211; February 22, 2022 Born in Memphis, Tennessee to Allie Blackwell and Purvis Blackwell. After birth he relocated to Mize, where he continued to grow up. He returned to Laurel and attended George... View Obituary & Service Information

The family of Jessie Neil Blackwell created this Life Tributes page to make it easy to share your memories.

Send flowers to the Blackwell family.