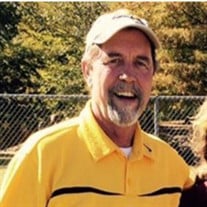 Joe Mitchell McCann, local business owner of Gulf States Forming and resident of Laurel, MS, passed away unexpectedly on March 15, 2020 at the age of 64 while visiting his daughter in Lucedale. Joe was born on April 18, 1955 in Mendenhall to Robert Cecil McCann and Louie Jo Sandifer McCann. He is a graduate of South Jones High School and Jones County Junior College. He is survived by his wife of thirty two years, Pam (Parker); his children, Kasey, Jodie (Randy Pierce), and Matthew (Elizabeth); his grandchildren Cohen and Maverick Pierce and Ward; his brothers, twin brother Jim (Melissa), Robert “Bob” (Ramona); and his mother in law, Gaye Kerr. He is predeceased by his father Robert Cecil McCann and mother Louie Jo Sandifer McCann. Joe was a devoted husband and best friend to his wife Pam and their two daughters. He was the best father and papaw. He enjoyed cooking, helping anyone he could, working on DIY projects, discussing politics, sports, and world views. He was a problem solver who often took on difficult and unwanted projects at work and around the house. When he was not working he was usually watching his grandchildren play soccer or being the scorebook keeper for the George County High School Softball Team that his daughter coaches. He spent many days and nights at athletic events whether coaching, keeping stats, or simply supporting - he never missed a game or any event of his daughters or grandkids. He was a classic gentleman who loved his family unconditionally, his country and its flag, his life’s work as a draftsman, and putting others before himself. He will be deeply missed by his friends, family, and all who knew him. Visitation is scheduled for 5:00pm until 8:00pm on Tuesday, March 17 and a funeral service is scheduled for 2:00pm on Wednesday,March 18 at Memory Chapel on Audubon Drive in Laurel. There will be a graveside service at Lake Park Cemetery following the chapel service. Pallbearers include Jimmy McCann, Greg Knotts, Tim Garner, Chance Waldrup, Rodney Waldrup, and Bryan Herrin.

Joe Mitchell McCann, local business owner of Gulf States Forming and resident of Laurel, MS, passed away unexpectedly on March 15, 2020 at the age of 64 while visiting his daughter in Lucedale. Joe was born on April 18, 1955 in Mendenhall to... View Obituary & Service Information

The family of Joe Mitchell McCann created this Life Tributes page to make it easy to share your memories.

Send flowers to the McCann family.