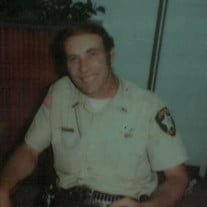 John Jefferson Roberts, Jr. “JJ” passed away at home on November 26, 2020, surrounded by family. He was born in Toomsuba, MS on June 17, 1937. He was 83 years old. John attended Jones County Junior College. He moved to Jones County, where he went to work with the Sheriff's Office as a Deputy Sheriff (1975-1981) under Sheriff George Chancellor and was then promoted to Chief Deputy for his remaining time there. He ran for Justice Court Judge unsuccessfully, and went to work for the Laurel Police Department (1982-2000) in the Emergency Communications Center until he retired. Prior to this service, he served and retired from the United States Navy after 20 years. He joined the United States Navy in 1954 where he served on several ships, most notably the USS Enterprise (CVAN-65) where he was over the radar system for the ship in the Combat Information Center. He served five tours during the Vietnam Conflict and was on board the Enterprise during the Cuban Missile Crisis, and when an accident occurred on January 15, 1969, aboard the Carrier as she was sailing in the Pacific Ocean about 70 miles southwest of Pearl Harbor, killing numerous crew members. He retired in 1974 as a Petty Officer First Class (E-6), after teaching Radar School at Great Lakes Naval Station, Illinois, for 4 years, JJ is survived by his wife, Jean Roberts; daughter, Patty Sherman; sons, John Roberts and John Jason Roberts; two grandsons, Zack Sherman and John Micheal Roberts; three granddaughters, Jessica Sherman, Lori Roberts, and Kimberly Roberts; one sister, Pearlie Mae Crawford; and one brother, Charles Roberts. John was preceded in death by his father, John Jefferson Roberts Sr.; mother, Pearl Roberts Knight; sister, Pauline Talley; and brothers, James, Doc, and Roy Roberts and Danny Knight. Visitation will be held at Memory Chapel Funeral Home on Monday, November 30, 2020 at 10 a.m. and a graveside service will follow at Myrick Cemetery at 12 noon. To sign the online guest book, visit www.memorychapellaurel.com.

The family of John Jefferson Roberts, Jr. created this Life Tributes page to make it easy to share your memories.