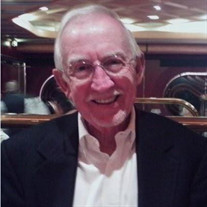 John W. Duff, 82, of Laurel, passed away Monday, September 9, 2019 at his residence in Laurel. Visitation will be held from 10:00am until 11:00am on Thursday, September 12th at Life Church in Laurel with the funeral service immediately following visitation. Service will be officiated by Pastor David Hagan, pastor of Life Church, Laurel. Pallbearers will be members of Life Church. John was born in Smith County on February 2, 1937 and his family later moved to Laurel. John attended Mississippi State University on the Masonite Scholarship where he graduated with a degree in Civil Engineering in 1958. After graduation, he was commissioned as a Captain in the US Army Corps of Engineers and later worked for the Mississippi Highway Department. After working for the Highway Department, he moved to Texas and was the Project Engineer on the Lake Livingston Reservoir Dam. He returned to Laurel and began his lengthy career with Bush Construction Company in 1966 and rose to the office of Senior Vice President. He later partnered with the Bushes in forming Pine Belt Ready Mix. During his career, he was an active member in the Mississippi Roadbuilders Association and Mississippi Concrete Industries Association. John was a devout Mississippi State University supporter where he created an endowed scholarship that enabled many Civil Engineering students to attend the university. As an avid reader, he also served on the Board of Directors of the Laurel- Jones County Library. John was a passionate and active member of Life Church. John was preceded in death by his parents, John W. Duff and Wincel Craft Duff Lafar. He is survived by his wife, Debbie Gillentine Duff, son, Paul Duff and wife, Beth, of Madison, stepson, Dax Wheeler, and grandson, Jason Duff and wife, Christina, of Madison. In lieu of flowers, the family requests memorial donations be made to Life Church of Laurel or the Laurel-Jones County Library or a charity of your choosing. To sign the online guest book, visit www.memorychapellaurel.com.

John W. Duff, 82, of Laurel, passed away Monday, September 9, 2019 at his residence in Laurel. Visitation will be held from 10:00am until 11:00am on Thursday, September 12th at Life Church in Laurel with the funeral service immediately following... View Obituary & Service Information

The family of John Wiendel Duff created this Life Tributes page to make it easy to share your memories.

Send flowers to the Duff family.