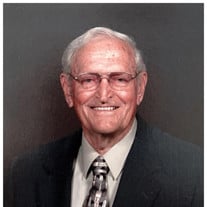 Joseph Preston Cooley, Sr, age 91, passed away peacefully at Lynnwood Senior Care in Laurel, MS on September 7, 2021. Preston was born October 19, 1929 to the late Fred W. and Martha E. Smith Cooley in Chattanooga, TN and then moved to Sandersville, MS in 1931. He graduated from Sandersville High School in 1947. He then attended Jones County Junior College where he was a member of the State Championship Football Team with his brothers, Sim and Fred who had returned from World War II, and was also proud of the fact that all 3 brothers graduated from Jones at the same time. Preston was a veteran of the Korean War after being drafted in 1951. He was assigned to the 307 Military Police Battalion and attended training in fingerprint techniques in Tokyo, Japan and then served in Pusan, Korea in POW camps on the mainland and off shore islands of Korea. He began his career with Transcontinental (Transco) Gas and Pipeline Corporation at Station 80, Sandersville, MS in 1955. He retired in 1988 after 33 years. Preston was a faithful member of Sandersville Baptist Church where he served as a deacon and Sunday School Director for many years. After retirement from Transco, he was a volunteer for the Christian Food Mission, delivering meals to shut-ins. Preston loved to garden and watch his brother, Sim, coach his Jones Bobcats in the fall. Preceding him in death were his brothers Sim and John Cooley and sister, Bess Cooley Buchanan. He is survived by his wife of 61 years, Maxine Norton Cooley. He is also survived by his three sons: Joseph “Joey” P. Cooley, Jr. (Angie), Paul Cooley and Darryl Cooley. Also surviving him are his eight grandchildren: Kate, Joseph P., III “Chip”, Jess, Peyton, Connor, Caiden, Parker Rae and Mary Mac Cooley. He is also survived by his brother Fred W. Cooley (Margaret) and brother-in-law, Charles E. Buchanan. Pallbearers will be Charlie Buchanan, Chip, Jess, Peyton, Connor, Simmy, and David Cooley. Honorary Pallbearer is Fred Cooley. The family wishes to thank Darlene Hill, his devoted caregiver, for her love, support and compassion with his care. We would also like to thank Dr. Jack Evans, Nila Conn RN and her staff at Lynnwood Senior Care for their compassionate care. Services will be held at Sandersville Baptist Church on Saturday, September 11, 2021. Visitation will begin at 10:00 am and the service will follow at 11:00 am. Interment will be at Sandersville Cemetery. Reverends Wesley Page and Bud Swindall will officiate. To sign the online guest book, visit www.memorychapellaurel.com.

The family of Joseph Preston Cooley created this Life Tributes page to make it easy to share your memories.

Send flowers to the Cooley family.