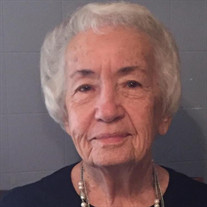 Juanita C. Musgrove, 89, of Soso passed to her Heavenly home on January 3, 2021. In 1950, she married L.V. Holifield, who passed away in 1957. Then, in 1958, she met and married the love of her life and father of her children, Eric Musgrove. They were happily married for 45 years until his passing in 2003. She is also preceded in death by her parents, Bennie C and Bertie M. Wigington Collins, brothers Donis Talmadge Collins and Bennie L. "Pat" Collins. She is survived by her daughters and sons-in-law, Donna (Robert) Pugh of Louin, Cindy (Tony) McLauchlin of Soso, a son and daughter-in-law Glen (Julie) Musgrove of Soso, brother and sister-in-law Billy Ray (Nancy) Collins of Soso, and sister-in-law Lunette Musgrove Perrett of Soso, 13 grandchildren, 22 great-grandchildren, a host of nieces, nephews and an untold number of friends. Juanita was a faithful member of Springhill Missionary Baptist Church where she served as pianist from the young age of 13 until her passing – a total of 76 years. She served in numerous capacities at the church thru the years as well as playing piano for countless funerals, weddings,revival services, church quartets and soloists. She played for a time for The Travelaires Quartet and The Searchers Quartet. In the 70's, she and her children, known as "The Musgroves", sang at churches, revival meetings, gospel sings, and events all thru the area. In the mid-70's, her musical family, under her direction and guidance, were recorded and that session used in the Philippines for worship service music by her former pastor and missionary to the Philippines, Ray Freeman. Juanita also served as a board member of what was known as "The Jones County Singing Convention", an organization that promoted Southern Gospel music sings and events throughout the area. Her service to Jesus Christ began at a very early age in her life and continued until her passing. She was a dedicated, Godly wife who always cared for her husband and was the "help-meet" described in the Bible. As a mother, she was the unquestionable greatest of all time - always caring for her children, grandchildren, great-grandchildren, family and friends. Those who encountered her quickly became a cherished friend and usually knew her as "Granny." She was an avid gardener who loved to work in her garden and tend to her beautiful flowers, and she loved to fish. Many stopped in to enjoy her delicious cooking over the years, and especially during the holidays, her homemade candies. Christmas 2020 was no exception! Funeral services will be held at Springhill Missionary Baptist Church on Springhill Rd in Laurel on Sunday, January 10, 2021. Visitation for friends will begin at 12:30 p.m. with funeral service at 2:00 p.m. Interment will follow in the Springhill Cemetery. Bro’s John Matt Musgrove, Tyler D. Powell and DeWitt Bain will officiate. Grandsons will serve as pall bearers. Memory Chapel Funeral Home is in charge of arrangements. To sign the online guest book, visit www.memorychapellaurel.com.

The family of Juanita C. Musgrove created this Life Tributes page to make it easy to share your memories.

Juanita C. Musgrove, 89, of Soso passed to her Heavenly home...

Send flowers to the Musgrove family.