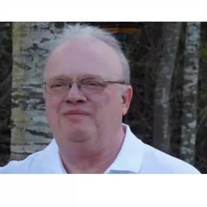 Larry Wayne Cave, age 64, went to his heavenly home January 15, 2021 at South Central Regional Medical Center. Larry Wayne Cave was born July 31, 1956.. His parents were Harry and Iona Cave of Stanley, VA. He was a 1973 graduate of Page County High School. Larry was very active in the Masonic organization, lodge number 184, in his hometown until moving to MS. He worked over 30 years for the Bureau of Land Management in northern VA. During his younger years he developed a love for country and sixties music and worked a while as a disc jockey. Upon retirement he began a music blog sharing his love of music. Larry was a wonderful husband, father and friend. He was a member of Trinity Baptist Church and loved his Sunday School brothers. Larry is survived by his wife,Susan Parrish Cave. Daughter, Valerie Cave (Stephen) of Tampa, FL. Step- son, Greg Lee (Cindy) of Chapel Hill, NC. Step-daughter, Melissa Stockstill (Dwayne) of Vicksburg, MS. Grandchildren, Emma Davis of MD and Layken and Cade Stockstill of Vicksburg, MS. He is also survived by brothers, Charles Cave (Bea) of WA state, Gary Cave of VA, sisters, Terri Barron (John) of MD, Linda DeSombre (Dale) of VA. He is also survived by a very special cousin, Mary DePriest (Dean) of San Diego, CA. He retired in 2013 and moved to Laurel, MS and married Susan. There will be a graveside memorial service at 10 a.m. Thursday, January 28, 2021 at Lake Park Cemetery. To sign the online guest book, please visit www.memorychapellaurel.com

The family of Larry Wayne Cave created this Life Tributes page to make it easy to share your memories.

Send flowers to the Cave family.