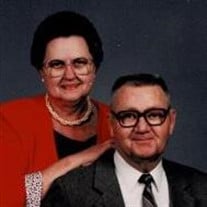 Laudice Daniel (L.D.) Scrimpshire, 85, of Moselle, MS, passed away after a long, hard-fought battle with illness at Forrest General Hospital in Hattiesburg, MS, surrounded by his family and friends on Saturday, October 19, 2019. Laudice is pre-deceased by his loving wife, Edith "Merle", of 50 years, his father, Daniel Webster (D.W.), his mother, Loberta (Hutchison) Scrimpshire, brothers James, Ray, Donald and Billy, and sister, Helen Scrimpshire Craft. He is survived by his daughter Shelia Scrimpshire Vogle and 3 sons, Charles Scrimpshire, Steven (Steve) Scrimpshire, and Michael (Scott) Scrimpshire, loving daughters-in-law, Debbie, Sheila and T.J. and many loving grandchildren and great-grandchildren. He is also survived by brothers Tommy Lee and David and sister, Linda Scrimpshire Daniels and many loved nieces, nephews, grandnieces, grandnephews, and cousins. Laudice was a proud member of the United States Army, achieving the rank of Chief Warrant Officer 2 (CW2) before his retirement in the early 1970s. He served his country during the Vietnam War and had many colleagues that he kept in touch with over the years. Devoted to his family, he began a second career as a Training Coordinator for the U.S. Seabees in Gulfport, MS, from which he also eventually retired. Laudice was devoted to supporting veterans and organizations that assisted veterans; he actively lobbied government officials on matters affecting veterans. He was also very supportive of St. Jude's and other medical research organizations. Of great importance to him was the loving relationship he had with his long-time neighbors, Grady and Teri Hall, whom he thought of as family and who had helped in many many ways and for whom the family will always be grateful. Laudice loved working with his hands and loved improving the land on which lived. He could often be found in his workshop, or on his tractor. He was loved by many and was active in his church (most notably the Kensington Woods Church of Christ and Ellisville Church of Christ) until illness made it difficult to attend. There will be a private family viewing at Memory Chapel in Laurel, Friday, October 25, 2019, from 10:00 AM to 12:00 PM, followed by open viewing from 12:00 to 1:30 PM. Graveside services will begin at 2:00 PM immediately following at Laurel Cemetery (Hickory Gardens) in Laurel, MS. Pall Bearers will be, Chris Vogle, Dusty Scrimpshire, Neil Scrimpshire, Eric Scrimpshire, Miles Musgrove, and Grady Hall. In lieu of flowers, please contribute to one of the charities he supported. Those include St. Jude’s Children’s Research Hospital, Paralyzed Veterans of America, Mississippi State Troopers Association, Magnolia Messenger, and the Arbor Day Foundation. To sign the online guest book, visit www.memorychapellaurel.com.

Laudice Daniel (L.D.) Scrimpshire, 85, of Moselle, MS, passed away after a long, hard-fought battle with illness at Forrest General Hospital in Hattiesburg, MS, surrounded by his family and friends on Saturday, October 19, 2019. Laudice is... View Obituary & Service Information

The family of Laudice Daniel (L.D.) Scrimpshire created this Life Tributes page to make it easy to share your memories.

Send flowers to the Scrimpshire family.