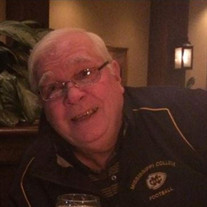 Raymond, MS - It is with great sadness that we announce the passing of Laurin Mack "L.C." Collins on June 20, 2021. He was 80-years old and left us peacefully in his sleep with family in attendance while at the home of his son Michael Collins. Born in Laurel, Mississippi, L.C. spent his childhood running with his siblings and the TAK (Tenth Avenue Kids) and playing every sport available to him. A natural athlete, he attended school in Laurel and graduated from Laurel High School in 1959. He played basketball, ran track, played tennis, was in the "L" Club, made Honor Roll, and perhaps most importantly to him - was the quarterback of the football team. Upon graduating from high school, he set his sights on playing football at Mississippi State like his older brother Bobby Collins. Unfortunately, he was second string behind a great quarterback, so he transferred to Delta State University so that he would be able to play the position he loved on the college level. He graduated from Delta State, got married, and had two children while living in Cleveland, MS. He coached at Delta State after he graduated and, in addition to being a father and a coach, he also worked nights to pursue a Master’s Degree which he received from the University of Mississippi. L.C. next took a job coaching football at the University of Richmond in Richmond, VA, in 1973. He remained there for five years and then headed back to the South when he took a job managing a Mayflower Moving Company in Birmingham, AL, in 1978. He moved to Clinton, MS, in 1983 to run the Mayflower branch in Jackson, but soon decided he missed football too much and returned to complete his career coaching all over the state of Mississippi. From Clinton High School to Mississippi College, from Northeast Community College to Copiah-Lincoln Community College, he pursued his passion. His last coaching job was probably the most special because he got to coach with his son at Pascagoula High School before he retired. Although he retired from football as a career, he was able to stay involved in the game by being a mentor and advisor and the number one fan of his son Michael as Michael coached at the University of the Cumberlands in Kentucky and at Mississippi College. L.C. loved football, but he loved his family more. He doted on his six grandchildren and three great-grandchildren and was always available to coach them, cheer them on, or help them with math homework. We will all miss L.C.'s quick wit and ability to entertain the room in any situation. He was full of love and was loyal to a fault. He enjoyed being the center of attention at the Collins Family Reunions that he enjoyed every few summers. Be it Disney World or Gatlinburg or Orange Beach or Vicksburg, L.C. was always happiest in the presence of his family. L.C. is survived by his two children; son Michael Collins and his wife Pamela of Raymond, MS; and daughter Lauren Reed and her husband David of Tupelo, MS. He is also survived by his sister Gala Graham, his sister Wilda Shoemaker, and his brother and sister-in-law Bobby and Lynn Collins. Grandchildren include Zachary Wagner, Kirby Wagner, Spencer Wagner, Sloan Collins, and Jackson Reed. Great-grandchildren include Halen Wagner, Symphony Wagner, and Axl Wagner. L.C. is preceded in death by his parents Thurmon and Christine Collins; his brothers Charlie Collins and Larry Bo Collins; and his grandchild Paige Wagner. In lieu of flowers memorials may be made to The Raymond Volunteer Fire & Rescue Department or The National Down Syndrome Society. Visitation will be at Memory Chapel in Laurel, Mississippi on Tuesday, June 22 from 5:00-7:00 p.m. A graveside service will be Wednesday, June 23 at 9:00 a.m. at Indian Springs Cemetery in Laurel, Mississippi. To sign the online guest book, visit www.memorychapellaurel.com.

Raymond, MS - It is with great sadness that we announce the passing of Laurin Mack "L.C." Collins on June 20, 2021. He was 80-years old and left us peacefully in his sleep with family in attendance while at the home of his son Michael Collins. Born... View Obituary & Service Information

The family of Laurin Mack "L.C." Collins created this Life Tributes page to make it easy to share your memories.

Raymond, MS - It is with great sadness that we announce the passing...

Send flowers to the Collins family.