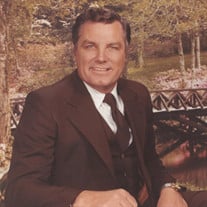 Leonard “Bud” Zelby Bigbie, 88, died Wednesday, May 4, 2022 at South Central Regional Medical Center in Laurel, Ms. Leonard was born April 15, 1934 in Arp, Texas to Jesse James Bigbie, Sr. and Leota Mae Gaby. He met the love of his life, Lesta Ann Olmstead, as a young teenager and they were married in 1954. He was a faithful and adoring husband for their entire 61 years of marriage before she was suddenly taken from him in 2015. He was the football stand-out who married the football sweetheart and he was always amazed at that fact. He graduated from London High School in New London, Texas in 1952, Kilgore Junior College in 1954 and East Texas State University (now Texas A&M) in 1957 with a BS degree in Industrial Education. At East Texas State, Leonard set a half-mile track record at 2.04 minutes. This record held for many years, only recently being broken. A football standout in high school and college, he was the 15th draft pick in 1957 for the Pittsburg Steelers and played against teams such as the Philadelphia Eagles. After the Steelers, he taught Industrial Arts and coached for the Houston Public School system for two years. A summer job with Gray Tool Company turned into a lifelong oil-industry career, moving their family from Texas to Louisiana and then to Laurel, MS in 1965. In 1970, Leonard and Ann started Big “B” Valve Repair & Service, Inc, servicing the oil industry in the southeast region of the United States, at one time with over 100 employees and locations in 4 states. Big “B” was also known locally for the lighted “Oilfield Christmas Tree” which stood in front of the Laurel location on Highway 15 North. They operated Big “B” until their retirement in 1999. He spent his retirement running “Daddoo’s Hotshot Service,” always on-call for his wife, his children, grandchildren, and his church. He could also often be found mowing the church lawn singing “How Great Thou Art.” Before and during retirement he raised Angus cattle on the “Honey Bee Ranch.” He was especially extremely proud of his children, grandchildren and great-grandchildren, often bragging to complete strangers how many ‘grands’ he had. Serving as deacon, he was an active member of Heritage Heights Baptist Church and a Mason. Leonard was preceded in death by his beloved wife of 61 years, Ann Olmstead Bigbie, his parents and his brother, Jesse James Bigbie, Jr. and a great-grandson, Matthew Kevin Reed. He is survived by his beloved “baby” sister, Ida Lou “Bit” Irvin of Lake Dallas, Texas, his daughter, Debra Bigbie Hinton and her husband Ray of Stringer; his son, Joseph Wayne Bigbie and his wife, Ellen, of Laurel as well as his best friend and brother-in-law, Robert Olmstead and his wife, Katie of Franklin, TX and beloved sister-in-law, Janet Olmstead Bizzell of Austin, TX. He is also survived by 8 grandchildren: Jennifer Pridgen Craft and her husband, Kevin of Hattiesburg; Jonathan Bigbie and his wife, Arielle of Hattiesburg; Angela Pridgen Reed and her husband, Kevin of Meridian; Krysta Bigbie McRae and her husband, Chris of Soso; Bethany Bigbie Byrd and her husband, Austin of Laurel; Joshua Pridgen and his wife, Jennifer of Ellisville; Robert Pridgen and his wife, Dayna of Petal; and Michael Bigbie and his wife, Genny of Brandon, MS. Additionally, he is survived by 14 great-grandchildren: Ariana Craft of Hattiesburg, Aidan Bigbie of Laurel, Shawn Myers and Abigail Myers of Laurel, Mary Helen Reed of Meridian, Christopher McRae, Krystina McRae, Krystie McRae and Christian McRae of Soso, Melody Gilbert and Eden Gilbert of Laurel, Lillianna Drummer and Emma Pridgen of Ellisville, Beckett Pridgen of Petal, M. J. Bigbie, Daniel Bigbie and River Grace Bigbie of Brandon, as well as many nieces and nephews. Visitation will be at 1:30 p.m. on Sunday, May 8, 2022 at Journey Church, Heritage Heights Campus, 4140 Hwy 15 North, Laurel with services following at 3:00 p.m. Burial will be at Union Line Cemetery in Jones County. Brother Ken Regan will officiate the services. Pallbearers will be grandsons Jonathan Bigbie, Joshua Pridgen, Robert Pridgen, Michael Bigbie, Aidan Bigbie and Kevin Craft. To sign the online guest book, visit www.memorychapellaurel.com.

The family of Leonard "Bud" Zelby Bigbie created this Life Tributes page to make it easy to share your memories.

Send flowers to the Bigbie family.