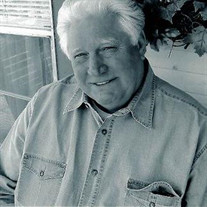 Mr. Mansel E. Ritchey, 76, passed away to his enteral home on December 17, 2019 at South Central Regional Medical Center in Laurel, Mississippi. Mansel was born March 3, 1943 in Greenville, MS He was the BEST husband, father and grandfather plus many more title to many people. Mr. Ritchey took great pride in being the husband of 51 years to his one true love, Kathleen "mama" as he referred to her so lovingly. He was a great father to Debbie Gooch and Pam Wildman and an amazing grandfather to four amazing grandchildren, Kamron Andrew Gooch, Terry Mansel Gooch, Allie Kathleen Gooch and Abbie Kara-Lynn Wildman. He is also survived by his sister, Sharon Rowley (Arlie) and brother in law, Rev. John Brown (Sue). He also claimed two sons that were not his by blood but in his heart, he called them sons, Jack Brown and Tony Dearman. He taught us to follow the Word of God and do the right thing always. He loved teaching the Bible among lots of other things. If you were around him very long, you would learn something if you would take the time to listen to him. He read the Word every day and was a doer of the Word of God. He was a great example of a Christian husband, father, grandfather and friend. He was a hard-working man. He drilled wells from Florida to Carlsbad, New Mexico. He worked for many companies. Mr. Ritchey retired as a rig manager from Nabors Drilling Company. During his career he was given the opportunity to attend many oil well related schools. As one of his nieces described him so perfectly... He was the glue that held this family together. He was always encouraging us to visit and keep the family gatherings intact. He loved his family with all of his heart. He is preceded in death by his parents, Rev. L. L. Ritchey and mother India Suvilla Ritchey; brother, Richard Lluellon Ritchey (Ilene), brother, Lewis Orbon Ritchey, brother, Dennis Truman Ritchey (Mary); sister, Annie Ruth Rayborn (Willie); sister, Esther Joe Mae Hicks ;sister, Mary Etta Torres; brother, Rev. Bobby Lewis Ritchey, brother, Joel David Ritchey; nephews, J. L. Raybom, Rickey Ritchey and Sammy Ritchey; his mother in law, Flora Lee Shedd; and father in law, William Bumice Shedd. He found great joy in handing out a single piece of candy to everyone he met. His doctors, nurses, banking personnel and while he was sitting on the bench at Wal-Mart waiting on mama to shop. Not having him here with us on this earth will be a place of void and sadness. Our hearts will never be the same without him here. Visitation will be Friday, December 20th, 2019 from 5-9pm at Memory Chapel. Mr. Ritchey's Funeral will be held on Saturday, December 21, 2019 at 11AM at Memory Chapel. Interment at Hickory Grove Cemetery in Laurel will immediately follow the service. Officiating will be his friend of many years, Mr. Joe Stringer, Rev. John Brown, Rev. James Roberts, and his pastor Rev. James Hodge. Pallbearers will be: Jerry Rayburn, Terry Rayburn, Richard Sanford, Terry Gooch, Jack Brown, and Danny Hicks. Honorary pallbearers will be David Ritchey, Kamron Gooch, Tony Dearman, Phillip Butler, and Duane Clanton. To sign the online guestbook, visit www.memorychapellaurel.com

Mr. Mansel E. Ritchey, 76, passed away to his enteral home on December 17, 2019 at South Central Regional Medical Center in Laurel, Mississippi. Mansel was born March 3, 1943 in Greenville, MS He was the BEST husband, father and grandfather... View Obituary & Service Information

The family of Mansel Ellis Ritchey created this Life Tributes page to make it easy to share your memories.

Send flowers to the Ritchey family.