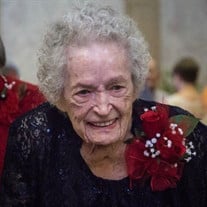 Marjorie Lucinda Walters was born to Pastor Henry Haden Poole and Viola Jane Poole on August 11th, 1918 in McLain, Mississippi. She is now walking on the streets of gold with her loving husband whom she was married to for 63 years. She passed to her heavenly home on March 13th at the age of 101. Her father died when she was only 4 months old. Her mother remarried William Stanson Trigg and the family moved to Clara, MS. It was there she met, fell in love, and married her husband, Judson Vardaman Walters. After marrying, she and JV moved to Laurel where, in the Glade community, they built a home and a small grocery store, JV Walters Grocery, and raised their two girls. Marjorie ran the store for 49 years before having to close due to JV’s health. During those 49 years, she had a major impact on everyone she met. Whether it was the amazing meat in her meat market she carefully prepared, the ice cream she dipped or the contagious smile she met you with, Marjorie made a lasting imprint on the lives of those she met. She was a member of the Antioch United Methodist Church. There she continued to influence the lives of others with her love for God. She was preceded in death by her husband, JV Walters; her parents, Henry Haden Poole and Viola Poole Trigg; brothers, Charlie Rayford Poole (Mary Lou) of Irvington, Alabama, Henry Haden Poole (Ina) of Laurel, MS, and Billy Backstrom Trigg (Grace) of Tyler, TX; sister, Ester Davis (Mack) of Pasadena, TX; daughter, Patricia Bullock Rogers of Laurel; and three sons-in-law, Gaston Buddy Everitt, George Jerry Bullock, and John Earl Rogers. Marjorie is survived by daughter, Marjorie Diane Everitt (Buddy) of Laurel; grandchildren, Donna Pullman (Duke), Russell Everitt, Jay Bullock (Cathy), Tim Bullock (Diane), Pam Blackledge (Stan), Joan Morgan (Ray), Bryan Rogers (Ashley), 12 great grandchildren; and 14 great great grandchildren. The services will be held at Antioch United Methodist Church on Saturday, March 28, 2020 with visitation beginning at 1 p.m. and the service at 2 p.m. Per family’s request, all services will be held outside of the church. Interment will follow at the church cemetery. Bro. Allen Freeman and Bro. Larry Sappington will officiate. To sign the online guest book, visit www.memorychapellaurel.com.

Marjorie Lucinda Walters was born to Pastor Henry Haden Poole and Viola Jane Poole on August 11th, 1918 in McLain, Mississippi. She is now walking on the streets of gold with her loving husband whom she was married to for 63 years. She passed... View Obituary & Service Information

The family of Marjorie Lucinda Walters created this Life Tributes page to make it easy to share your memories.

Send flowers to the Walters family.