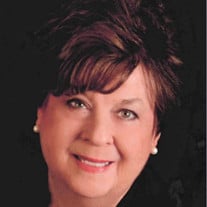 Mary Edith Crumbley Walker, 84, entered into the presence of our Lord and Savior on Sunday, March 15, 2020, at home in Winston-Salem, North Carolina. She was born in Laurel, MS, the daughter of Mary Edith and Bura Joseph Crumbley. After graduating from George S. Gardiner High School, she went on to attend both the Mississippi University for Women and the University of Southern Mississippi earning a degree in Elementary Education. She was a proud member of the Kappa Delta sorority. Mary married her high school sweetheart, Cecil Felton “Buddy” Walker, Jr. and settled down in Laurel to raise their family. She taught school for a few years, then decided to devote her life to her growing family and volunteering at church and in her community through the Laurel Junior Auxiliary and other organizations. She also enjoyed her many years with her garden club and bridge club. Mary was a member of First United Methodist Church in Laurel until she moved 15 years ago to be near her daughters in North Carolina. Although she left behind many dear lifelong friends in Laurel, she was blessed to have dear friends in Winston-Salem as well. Mary was a member of First Presbyterian Church in Winston-Salem and enjoyed her ladies circle. She was also a member of the Newcomers Club and worked part time at Ivy Arch. Mary was an avid bridge player but enjoyed more than anything being around her friends and family. In addition to her parents, Mary was preceded in death by her husband, Cecil Felton Walker, Jr and brother, Joe Crumbley. She is survived by two daughters, Edie Waterer and her husband, Ronnie, of Winston Salem, NC, Alison Barry and her husband, Bradford Barry of Charlotte, NC, and a son, Chip Walker and wife, Liz of Jackson, MS. Tudda, as her grandchildren called her, will also be greatly missed by Maredith Waterer Whitney (Andrew), Madelyn Waterer Lukish (Tommy), Johnson Waterer (Mary Margaret), TJ Waterer, Jared Waterer, Elizabeth Walker, Mary Faser Walker, Felton Walker, Mary Kathryn Barry and Emily Barry, and great grandchildren, Reagan and Sawyer Whitney and Evelyn Waterer. A graveside service will be held at 2:00 on Friday, March 20, at Hickory Grove Cemetery in Laurel, MS. We would love for any friends, who are able, to join us in our celebration of Mary’s life. Tents and chairs will be provided. In lieu of flowers, memorial donations may be made to: The Campaign for Children’s of Mississippi, Office of Development Accounting, 2500 North State Street, Jackson, MS 39216. www.growchildrens.org/donate, Camp Blue Skies, 2820 Selwyn Avenue, P. O. Box 767, Charlotte, NC 28209 and www.CBS.org. Crossnore School and Children’s Home, 1001 Reynolda Road, Winston-Salem, NC 27104. www.crossnore.org. Online condolences may be made at: www.salemfh.com and www.memorychapellaurel.com

Mary Edith Crumbley Walker, 84, entered into the presence of our Lord and Savior on Sunday, March 15, 2020, at home in Winston-Salem, North Carolina. She was born in Laurel, MS, the daughter of Mary Edith and Bura Joseph Crumbley. After graduating... View Obituary & Service Information

The family of Mary Edith Crumbley Walker created this Life Tributes page to make it easy to share your memories.

Mary Edith Crumbley Walker, 84, entered into the presence of...

Send flowers to the Walker family.