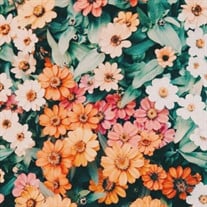 Mary Jo Wedgeworth died April 15, 2022, surrounded by loving family peacefully at home. Mary Jo Morgan Wedgeworth 97 years old Born December 30, 1924 Married to Hilman Wedgeworth for 67 years Preceded in death by her parents, Thomas and Emmie Jo Meeks Morgan; brothers, Hollis, Thomas (Marge), Preston (Gert), Charlie (Delores), Vernon (Narcissa), Ben (Gay), Donald (JoAnn); and son-in-law, Dan Miller. Survived by her children, grandchildren, and great grandchildren, James (Jane) Wedgeworth, Marsha (Chuck) Blackburn, Karen Miller; grandchildren, Mary Morgan (Paul) Ketchel, Chad (Hillary) Blackburn, Brandi Jane (Jason) Graham, Marsha (Drew)Hunter, Chip (Madalyn) Wedgeworth, David (Abbi) Wedgeworth, McKensie Miller; brothers, Howard (Eloise) Morgan, Roy (Barbara) Morgan, Marion (Elaine) Morgan; sixteen great grandchildren; and a host of beloved nieces and nephews. Mrs. Wedgeworth was a lifelong resident of Laurel, MS. During her youth, she was the 1944 Winner of the National 4-H Club Girl Achievement award and the President’s trophy. This was awarded to her at the National 4-H Club Congress in Chicago, IL. She continued to be an active participant in Mississippi 4-H Club programs serving in numerous leadership roles and always serving as a local 4-H club leader. She served on the Mississippi 4-H Club board and as president of the Mississippi Extension Service Homemakers and FCE Club. She was a member of First Baptist Church and active in women’s programs and Sunday school. She especially loved providing beautiful flower arrangements made with cuttings from her garden for church events. Active in the Waynesboro Drive Garden Club, the Mississippi Council of Garden Clubs serving as President, the Deep South Garden Club Council and as a nationally accredited flower show judge. She was known for her entertaining and educational programs on flower arranging, gardening and recycling. In 1967, she was honored by Keep America Beautiful with their lifetime achievement award for her exceptional efforts to keep our nation beautiful. Some of her efforts included working to develop the Avenue of Magnolias at each of Mississippi’s interstate state line entrances and also the garden club wildflower program. One of her mottos was to “leave things in better shape than you found them”. In 1976 she was honored with the Mississippi Volunteer Activist award for the thousands of hours she gave in volunteer service to her community. Indeed, her community activism began early with organizing Victory gardens to support America’s effort during World War II. Her lengthy volunteer service included numerous positions with the Jones County Republican Party, chairmanships of both the Jones County Republican Women and the Mississippi Republican Women. Mrs. Wedgeworth was a docent for the Lauren Rogers Museum of Art where she so enjoyed giving tours and teaching children about the collections held at the museum. For decades, she served on the board of the Red Cross and always had helping hands to assist victims of hurricanes and disasters who sought shelter from the storm. During the aftermath of Hurricane Katrina, she and Hilman welcomed and served meals to hundreds who fled to the Red Cross shelter in Laurel. In lieu of flowers, the family requests donations to the Lauren Rogers Museum of Art, Laurel, MS. To sign the online guest book, please visit www.memorychapellaurel.com

The family of Mary Jo Wedgeworth created this Life Tributes page to make it easy to share your memories.

Send flowers to the Wedgeworth family.