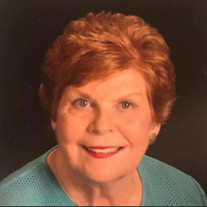 Maureen Heffernan Liberto, age 85, of Oxford, Ms. passed away Monday, February 21, 2022, in Oxford, Mississippi. A native of Montreal, Canada, she moved to Laurel in 1958 as the bride of the late V. A. Liberto. She received her bachelor, master and doctorate degrees from the University of Southern Mississippi. She was retired as assistant director of admissions and guidance at Jones County Junior College. She organized and served as counselor of Council on Drug and Alcohol Awareness at JCJC. She also served on the Mississippi State Council of Alcohol and Drug Prevention. She was past president of the Pine Belt Counselors Association, a past member of the Citizens Advisory Committee, a board member of the Economic Development Authority, a member of the Laurel Arts League, Northwood Garden Club and life member of the Laurel Junior Auxiliary and was selected as the Humanitarian of the Year. She also served as member of the Lauren Rogers Museum board and museum docent. One of the founders of the Christian Food Mission, she had also been a member of the Mississippi and National Press Women. She served as a member of the YWCA board of directors. She received the Diana Award in 1979 and the DAR Americanism Medal of Honor. Always an active member of her church, she has served on the Diocesan Ecum enical Committee and past president of the Women of the Church. She served on the state board of Catholic Charities. She moved to Oxford in 2003 and was associated with the University of Mississippi as director of the Ole Miss First Scholarship program. She was active as Eucharistic minister at St. John’s Catholic Church in Oxford. Not to be overshadowed by her many accolades and civic contributions, first and foremost, she was a dedicated wife, mother, sister, grandmother, friend and community volunteer. She was a loving and caring woman, always giving her time to others, but at the center of her soul, and of paramount importance, were her children, whom she loved dearly. Maureen’s love for education and community allowed her to touch many lives through her years and her beautiful and gentle spirit will be missed by many. She is preceded in death by her second husband, Stephen Joseph Sura from Montreal, Canada that she married in 2008 in Oxford. She is also preceded in death by her parents Mr. and Mrs. Fintan Heffernan, her brother, Fintan Heffernan (Louise) of Canada and her first husband Vincent Anthony Liberto and sons, Vincent Anthony Liberto. Jr., Thomas David Liberto (Delane), Richard Fintan Liberto and grandson Tony Liberto. She is survived by her daughter, Lee Ann Boyette (Gary) and grandchildren Lee Boyette (Aleza), Margaret Kleiber (Ryan), Alex Boyette, Amanda Liberto, Lance Liberto (Chelsey) and Nicholas Liberto, and great grandchildren Anthony Boyette, Elliott Boyette, Noah Liberto, LaRue Liberto, and Jude Liberto. Funeral services will be held at St. John the Evangelist Catholic Church in Oxford at 11:00 AM Saturday, February 26, 2022, following the visitation at 10:00 AM at the church. A graveside service will be held in Laurel, Mississippi on Monday, February 28, 2022 at 11:00 AM. The family would like to express our thanks for wonderful help and care given by The Magnolia and Hospice of Oxford. In lieu of flowers, friends may make memorial donations to the Christian Food Mission in Laurel, Mississippi and St. John the Evangelist Catholic Church, Oxford Mississippi. To sign the online guest book, please visit www.memorychapellaurel.com

Maureen Heffernan Liberto, age 85, of Oxford, Ms. passed away Monday, February 21, 2022, in Oxford, Mississippi. A native of Montreal, Canada, she moved to Laurel in 1958 as the bride of the late V. A. Liberto. She received her bachelor, master... View Obituary & Service Information

The family of Maureen Heffernan Liberto created this Life Tributes page to make it easy to share your memories.

Send flowers to the Liberto family.