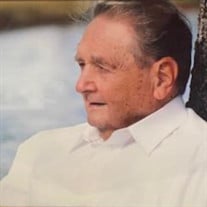 Merle Freeman Oglesby, 97, went home to be with his Savior April 9th, 2022. Freeman was born March 27th 1925 to parents Ralph and Eunice Oglesby in Kansas City, Missouri. He started his music career by singing in a boy’s choir in Kansas City at an early age. He enlisted in the Army at the age of 19 and served in WW II as a flight engineer and mechanic on the B-29 airplane. Freeman went on to attend Kansas University in Lawrence and was an accomplished musician, vocally and on the piano and organ. He is preceded in death by his first wife, Buzzy Oglesby, with whom he raised four children in Ashland, Nebraska. He was active in the school system and the Ashland Christian Church. He also served as President of the Full Gospel Businessman’s Association in Omaha, Nebraska. Freeman moved to Laurel, Mississippi and worked for Sanderson Farms as Fleet Manager until retirement. He attended Word of Life Church in Laurel, MS where he met Donna who became his wife. He lovingly helped raise her daughter, Jennifer, and grandchildren, Hannah and Jace and was known as Grampy to many who knew him. He became an active member of Grace Covenant Church in Ellisville where he served on the board for 15 years. Freeman enjoyed playing piano, working out and spending time with his large family. He was a loving Husband, Father, Grandfather and Great Grandfather. He is survived by his wife Donna Oglesby, and his children, Dave Oglesby from Phoenix, AZ , Tim Oglesby from Buehler, KS, Melissa Gevo from Atlanta, GA , Suzy Johnson from Lincoln, NE, and Jennifer Jackson from Laurel, MS. Freeman also has 15 Grandchildren and 33 Great grandchildren. Visitation will be held on Thursday, April 14th from 5-7 p.m. at Memory Chapel in Laurel, MS. Funeral Services will be held at Grace Covenant Church, 100 Grace Lane, Ellisville, MS at 2:00 p.m. Friday April 15th. Additional visitation will be held in Lincoln, NE on Wednesday April 20th from 5-7 p.m. at Roper and Son’s Funeral Home, 4300 O Street Lincoln, NE. Burial service to be held at Lincoln Memorial Park Cemetery, 6800 S 14th St., Lincoln, NE on Thursday April 21st at 11:00 a.m. To sign the online guest book, visit www.memorychapellaurel.com.

Merle Freeman Oglesby, 97, went home to be with his Savior April 9th, 2022. Freeman was born March 27th 1925 to parents Ralph and Eunice Oglesby in Kansas City, Missouri. He started his music career by singing in a boy&#8217;s choir in Kansas... View Obituary & Service Information

The family of Merle Freeman Oglesby created this Life Tributes page to make it easy to share your memories.

Merle Freeman Oglesby, 97, went home to be with his Savior April...

Send flowers to the Oglesby family.