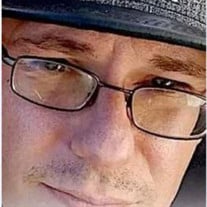 Michael Davis Shoemaker, Jr. "Mykey” born July 14th, 1981, died January 19th, 2021, at a residence off of Highway 11, Laurel, MS. Michael, was the son of Michael Davis Shoemaker, Sr. and Tracy Shoemaker McLaughlin Reeves of TN and stepson to Thomas J McLaughlin of TN. Michael was preceded in death by his father Michael Davis Shoemaker, Sr., his grandfather Curtis Taft Medlock of Memphis TN, grandmother Charlene Dry Medlock of Laurel, MS, and cousins Jonathan Dry and Troy Dry both of Laurel. He leaves behind an eighteen year old daughter Curristen Shoemaker of Roosevelt, Utah, and an eleven year old son Jayden Shoemaker and an eight year old daughter Zoey Shoemaker both of Navarre, FL, his mother Tracy Shoemaker McLaughlin Reeves who is too ill to attend the funeral, stepfather who loved him as his own Tomas J. McLaughlin, sister Trina Thompson of Hattiesburg, two nieces Casey Donald Newell of Laurel and Katherine Donald of Hattiesburg, two great nephews Ayden Donald of Laurel and Jaxston Verilyea of Hattiesburg, a great niece Haha Smith of Laurel, a goddaughter Jade Johnson of Laurel, and numerous cousins, friends, and acquaintances. Little brother your wings were ready for you way before we were ready to let you go. You were such a kind kindred spirit that had your own demons to deal with in a daily basis and would have done anything for the ones you loved. You will forever be missed Michael. Visitation will at Memory Chapel Funeral Home on Tuesday, February 2, 2021 from 2 p.m. to 3 p.m. Michael will be cremated after and his ashes distributed to fulfill his wishes. A memorial will be held for him after his ashes return. Love you lil brother, soar high, spread your new gorgeous wings, and fly high till we see you again.

The family of Michael Davis Shoemaker, Jr. created this Life Tributes page to make it easy to share your memories.