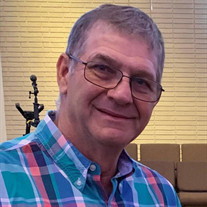 Michael (Mike) Carl Wilkerson, 59, of Laurel suddenly passed away at South Central Regional Medical Center on February 15, 2022. A graveside memorial service will be held on Monday, February 21, 2022, at 2:00 p.m. at the Goodwill Missionary Baptist Church Cemetery. Pastor Ken Harrison and Chaplain Kenneth Wilkerson, Jr. will officiate. Mike was born on May, 11, 1962, in Selma, Alabama. After residing in Pine Hill and Camden, Alabama until the age of 36, he was a lifelong resident of Laurel, Mississippi. He graduated from Catherine Academy in Catherine, AL, Class of 1981. Mike enjoyed spending time with his wife of 40 years, children and grandchildren. His family was his entire world. He enjoyed spending time outdoors- fishing, camping, raising goats, and running his business, Johnnie Wright Radiator Service. Mike was preceded in death by his parents, Albert Kenneth Wilkerson, Sr. and Mollie Jane (Moring) Wilkerson of Camden, AL. He is survived by his loving wife, Penny Harvell Wilkerson; two children, Michael Wilkerson (Kristina), and Mandy Pearson (John); five grandchildren, Cadie and Maddie Wilkerson and Hadley, Harper and Henry Pearson; his brothers, Kenneth Wilkerson, Jr. (Margaret) of Enterprise, AL, Cliff Wilkerson (Jennifer) of Columbus, MS and Scott Wilkerson (Gloria) of Monroeville, AL; and a host of nieces and nephews and great nieces and nephews. Pallbearers will be Jabo Beck, Les Ladner, Scott Hubbard, Shawn Garrett, Trent Wilkerson and Whitt Wilkerson. Jesus said to her, “I am the resurrection and the life. Whoever believes in me, though he die, yet shall he live, and everyone who lives and believes in me shall never die. Do you believe this?” John 11:25-26 To sign the online guest book, visit www.memorychapellaurel.com.

The family of Michael (Mike) Carl Wilkerson created this Life Tributes page to make it easy to share your memories.

Send flowers to the Wilkerson family.