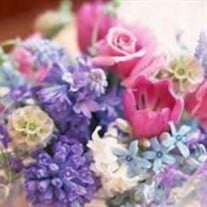 Myrtle Manning Rushton, 92, left this life for Heaven on Sunday, May 23, 2021 at her home at Brookwood Villa in Waynesboro. Mrs. Rushton was born Oct. 2, 1928, the second daughter of Willie and Jewel Manning. On Sept. 5, 1947, she married the love of her life Troy Maxwell “Max” Rushton and they began their life together, sharing a love that would set a standard of beautiful commitment for their children and grandchildren. The couple went on to have two daughters, Mona and Carla. In 1978, Mrs. Rushton was promoted to grandmother and was given the name Mamaw, a name she treasured and lived up to. She and Mr. Rushton, affectionately known as Grandaddy, spent their retired years together until he was called Home in January 2002. Mamaw was a lifelong student of God’s Word, and she taught numerous Sunday school classes through the years. She was also known to be a valiant prayer warrior. Her life is exemplified by this verse, 2 Timothy 1:5: "I am reminded of your sincere faith, which first lived in your grandmother Lois and in your mother Eunice and, I am persuaded, now lives in you also." She made spending time in God’s Word and in His presence a priority, and she prayed fervently for her children and grandchildren and their families. She lived to see all of her children and grandchildren loving and serving Jesus, in no small part the result of her prayers. In her later years, she again worshipped at Florence Congregational Methodist Church, the church she attended as a child. She will now be laid to rest there next to Grandaddy. Mrs. Rushton was preceded in death by her precious husband Max: her mother Jewel Thatch Manning; her father Willie M. Manning; her infant brother Rostell Manning; her sister Ruby Dean Manning Flynt; and her brother Larry D. Manning. Mrs. Rushton is survived by her daughters Mona Rushton Dewease (Bro. David) and Carla Rushton Walley (John); her grandchildren Brooke Dewease Smith (Bro. Chris), Chad M. Walley (Mitzi), Bro. Brandon D. Dewease (Erin) and Heidi Walley Falls (Brad); as well as her seven great-grandchildren, Chloe Smith, Max Walley, Judah Smith, Ella Dewease, Asher Dewease, Lydia Walley and Gray Falls. She is also survived by her brother Willie Maurice Manning (Carol) and a host of beloved nieces and nephews. The family invites all family and friends to join them for a celebration of Mamaw’s life on Wednesday, May 26, at Florence Congregational Methodist Church in Sandersville. Visitation will be at 10 a.m. and the funeral at 11a.m., with interment to immediately follow in the church cemetery. Pallbearers will be grandchildren, Chad Walley, Brandon Dewease, Chris Smith, and Brad Falls, and nephews, Ronnie Flynt and Todd Manning. Honorary pallbearers will be great grandchildren, Max Walley, Judah Smith, Asher Dewease, and Gray Falls. To sign the online guest book, visit www.memorychapellaurel.com.

Myrtle Manning Rushton, 92, left this life for Heaven on Sunday, May 23, 2021 at her home at Brookwood Villa in Waynesboro. Mrs. Rushton was born Oct. 2, 1928, the second daughter of Willie and Jewel Manning. On Sept. 5, 1947, she married... View Obituary & Service Information

The family of Myrtle Manning Rushton created this Life Tributes page to make it easy to share your memories.

Myrtle Manning Rushton, 92, left this life for Heaven on Sunday,...

Send flowers to the Rushton family.